Building 10 in Sovetskaya street is a 3-storeyed complex with a staircase in the center. The main facade is divided by cornice belts and shoulder blades (with ribbed squares - on the first floor and panels with rosettes - on the second), turning into double semi-columns on the third floor. The paired arched windows of the second floor are decorated with platbands with inlaid columns and wedge-shaped rustic vaults. Between the platbands there are reliefs of children's heads on round medallions. The paired elliptical arched windows of the third floor are decorated with stacked platbands made of small cubes with a carone-shaped completion. Between them there are diamond-shaped elements..

The cornice on the first floor is formed by a belt of dentikul, on the second floor it is multilayered with denticles, lancet arcature, on the third it is complex, with various architectural details. On the roof there are parapet posts united by metal gratings. They are crowned with shoulder blades and are decorated with rosettes. The two central posts are connected by a bridge that forms an attic. It is decorated with a star-shaped rosette with a through hatch, two beams of which diverge downward.

The display windows, the entrance to the staircase and the opening for the passage to the courtyard are decorated with wide wedge-shaped rustication with castle stones. On the third floor, symmetrically to the central vertical axis of the building, there are two balconies, finished with forged metal railing. The internal layout is enfilade. The facade from the side of the courtyard is decorated with a projection, trimmed with an arched belt of curbs and topped with a triangular pediment, two large annexes and two smaller ones that form a kind of balconies.

The combination of elements of the so-called “Russian style”, motifs of the Baroque and Modern in the exterior of the building makes it possible to attribute it to the examples of eclectic architecture.

Building 10 in Sovetskaya street belonged to the type of tenement houses. Apartments were located on the 2nd and 3rd floors, and on the 1st floor there were offices of commercial and industrial enterprises and shops. Dimensional drawings made by German prisoners of war after the liberation of Gomel make it possible to accurately date the monument to 1894 (the number was on the metal grate, which has not survived). After the revolution, for some time the house was used to house the central pioneer club (1927). During the Great Patriotic War the building was significantly damaged, in 1951 it was restored. Despite serious internal damage, the exterior of the house remained largely intact after the restoration.

Now on the first floor of the house there is a shop, a cafe, the second and third floors are residential. 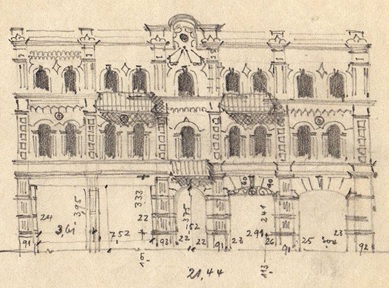 Sovetskaya str., house 10. Dimensional drawings of the 1940s, made by German prisoners of war after the liberation of Gomel. From the funds of the museum GIKU "Gomel palace and park ensemble". 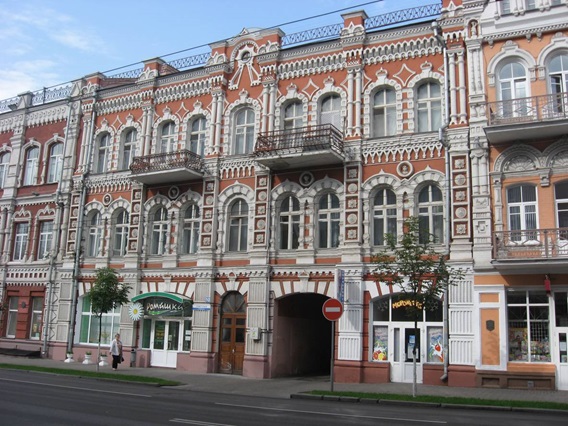