The best architectural buildings at the turn of the nineteenth and twentieth centuries were situated in Gomel's main street Rumyantsevskaya (now Sovetskaya street). Among the examples of this kind of architecture is the building of the Gomel Public Assembly or, in other words, the City clubhouse. The construction and decoration of the building is based on the so-called "brick style", where brick acts both as a material and as an element of decoration.

The original design of the building at 26, Sovetskaya Street has not survived, so it is difficult to imagine its original form. The post-war tonnage plan gives an approximate idea of the pre-war form of the building - the main entrance, completed with an arch with a keystone, window showcases separated by spatulas, and the intricate attics, which gave the building gracefulness, have not been preserved to this day.

The vertical of the risalits is defined by doorways with profiled plinths, above by double windows flanked by rusticated blades (the 1st floor) and twin pilasters (the 2nd floor), richly finished with denticles. The rhythm of the central part is shaped by window openings - showcases in the middle and twin ones on the edges. Each group is bordered by a toothed (the 1st floor) or arcature (the 2nd floor) frieze. The frieze is complemented on the top and bottom by scalloped sills (the 1st floor) and toothed sills (the 2nd floor). The vertical décor follows the decoration of the risalits. On the 3rd floor pilasters complement square panels with oblique braided cross. A wide frieze with modulo and profiled cartouches surrounds the street frontage. The border with the roof is enclosed by a low wrought iron railing.

The date of construction of the house at 26, Sovetskaya Street is unknown.But there are buildings in Sovetskaya street with the same style and date (No.1 - 1880s, No.10 - 1894). Besides, in the 1900 book by L. Vinogradov "Gomel. Its past and present" there is a story about winter theatrical performances in the hall of the Public Assembly. This suggests that the house at 26, Sovetskaya Street was being built in the 1880-90s.

In 1913 the building belonged to Tseytlin (reference calendar "All Gomel"), in 1915 to Margolin (reference book "Gomel and its district"). Many commercial and household establishments and offices were located in this house. After the Second World War in 1952 the building was restored and adapted for the Gomel City Communist Party Committee. In the 1990s it was the seat of the Radiological Institute. Today it houses the A. Hertzen Central City Library. 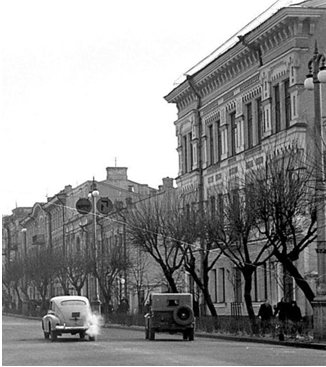 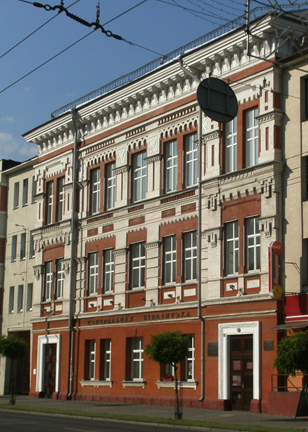