The building is three-storeyed,. It has two main facades-in Sovetskaya Street and in Biletsky Street.The facade inSovetskaya street   is an extended, symmetrical composition formed on the first floor by arched windows and doorways with stucco framing, on the second – by rectangular windows with stucco platbands and three-part stepped sandricks, on the third-by alternating rectangular windows and balconies with semicircular bases and a wrought-iron fence. The first floor is separated from the second by a wide draft with panels. The facade is crowned by an attic of complex shape with a luxar.The facade in th BiletskyStreet with a similar composition differs in a shorter length. An additional emphasis is placed on the doorway with rusticated blades and a triangular sandrik on the first floor and on the window with a profile sandrik on the second. The roof is gable, metal. There is a wide multi – profile cornice along the entire perimeter of the building. On the side of the courtyard, a modern one-story extension adjoins the main volume. The interiors of the monument do not represent a separate value.

Sovetskaya Street (until 1919 – Rumyantsevskaya Street) is one of the oldest highways in Gomel. In the XIX-early XX century, it became the main street of the city, where its commercial, entrepreneurial and social life is concentrated. Many houses were built on it as profitable, where the first floor was occupied by commercial and economic enterprises, and the premises of the remaining floors were rented out as apartments.

In the photo of the early twentieth century, the house on the corner of Rumyantsevskaya and Millionnaya (modern Biletsky Street) was two-story. The first floor was occupied by all kinds of shops and offices, on the second there was the hotel ”Gomelskaya" of Rudievsky (?). The building was Dobkin's household. The exterior of the building from the Rumyantsevskaya side generally corresponded to the modern one. On the Millionnaya side, a series of windows similar to the Rumyantsevsky facade continued on the second floor, and on the first floor, the entrance to the courtyard territory was organized in the form of a high arched opening with a balcony above it. Some stylistic features of the building make it possible to assume that the time of its construction dates back to the middle-second half of the XIX century.

The fact that both the composition and the architectural decor of the monument on two floors have almost completely preserved their pre-revolutionary appearance indicates that the building from the side of Sovetskaya street   did not suffer much during the Great Patriotic War. During its restoration in 1951, the third floor was added. At the same time, there were changes on the part of Biletsky, while maintaining the overall composition: instead of entering the courtyard, the entrance to the building was organized, and the length of the building along the street was reduced.

Currently, the building houses a design center, a bookstore, and residential apartments. 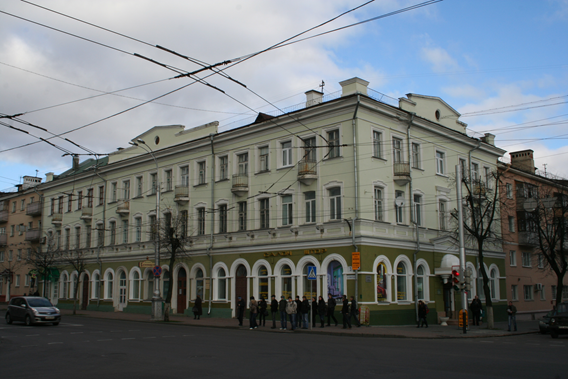