THE LIBERATION OF THE CITY OF GOMEL. CHRONICLE OF EVENTS

21 September 1943 the situation report of the Soviet information Bureau message about the Gomel direction. The successful crossing of the Dnieper and the Sozh, the release of Mosquito, the Terekhivka, Branches, dobrusha, Novobelitsy, love etc. the settlements allowed the Soviet forces to begin immediate preparation for the decisive battles for the regional center, which entered the history of the great Patriotic war under the name Gomel-Rechytsa operation.

In the Gomel-Rechytsa offensive operations of troops of the Byelorussian front (commanded by General of the army K. Rokossovsky) held from 10th to 30th November 1943., participated 50-I (Lieutenant General I. V. Boldin), 3-I (Lieutenant-General A. V. Gorbatov), 63-I (Lieutenant-General V. Y. Kolpakchi), 48-I (General-Lieutenant P. L. Romanenko), 65 (Lieutenant General P. I. Batov), 11 (Lieutenant-General I. I. Fedyuninsky), 61 (Lieutenant-General P. A. Belov) and 16 air (Colonel General S. I. Rudenko) army.
On the outskirts of Gomel, the enemy had built a strong line of defense, has concentrated a large number of tanks and artillery and strong resistance. Actions ground the German forces were actively supported by the aircraft. Despite all the efforts of the enemy, the Soviet troops aggressively moved forward and on the evening of November 25, 1943. three sides came to Gomel. Fearing encirclement, Hitler's command began to withdraw troops from the area between the Sozh and the Dnieper.
On the night of November 26, the part 217 Unechskaya infantry division, Colonel N. P.Macanova and 96th infantry division, Colonel F. G. Bulatova of the 11-th army rushed to the Northern suburb of Gomel. At the same time from the South-East, in the city broke part of the 4th Bezhitsa Baptist infantry division, Colonel D. D. Vorobyov, the 115th fortified major-General F. F. Pichugin (11th army) and the 102nd far Novgorod-Seversky infantry division, major General A. M. Andreev of the 48-th army.
On 26 November 1943. Gomel was liberated from the Nazi invaders.Shooter 1-th company of the 39th infantry regiment, 4th Bezhitsa Baptist infantry division corporal M. I. Vasilyev, hoisted the Red flag on the dilapidated building of the city power plant, and mitsurugi red army newspaper "the Banner of the Soviets" 11-th army Lieutenant G. V. Kirilyuk ─ fire tower.
In the report of the military Council of the 11th army commander of the Belarusian front K. K. Rokossovsky on 26 November it was reported: "...army Troops after days of fierce fighting, today, 26.XI. to 9-30 captured the regional center of the Belarusian SSR, the city of Gomel, a major communications node and important strong point of defence of Germans on the right Bank of the Sozh river".
The active assistance of the troops of the front in the liberation of Gomel and other settlements provided the people's Avengers Gomel (under the command of major-General I. P. Kozhara) polisky (Colonel I. D. Vetrov) guerrilla.
In the evening the whole country knew about the new victory of the Soviet troops. With 20 artillery salvoes from 224 guns in Moscow saluted the valiant troops of the Byelorussian front liberated the first regional center of Belarus, an important railway junction and powerful strongpoint of the enemy in the Polesie area.
To maintain order in the city and transfer it to local authorities was appointed commandant of the city mayor Gridnev is a senior instructor of the political Department and its assistant the senior Lieutenant Puganov – the organizer of the 39th regiment. 23 units of the Belarusian front, the most distinguished in the battles for the liberation of Gomel, was awarded the honorary title "Gomel". Many soldiers received high title of Hero of the Soviet Union, thousands were awarded with orders and medals.
The population of the liberated Gomel with great joy and tears greeted their liberators. 27 Nov 1943. the next day after liberation of Gomel newspaper "Red Star" wrote: "it is Difficult to answer the question: are there still Gomel? The house exploded, ashes, over which rises the grey smoke, broken fences, broken fences, broken Windows, in the remaining homes, streets strewn bits of furniture...This type is the scene of the robbery, after the flight of the robbers..."
The eyes of those who had to return home after the liberation of the city, appeared a tragic picture: the ruins, dead wastelands, sticking out of the pipe burned homes, sparkling dark eyes breaks dilapidated box of stone buildings. The destruction suffered by all enterprises, stations, road and railway bridges, hospitals, schools, cultural institutions.
Preserved documents that describe the state of the industrial enterprises of the city after the liberation by the Soviet Army: "...Gomselmash... Left a few boxes of dilapidated industrial buildings... machine-Tool plant them.Kirova...Not survived a single car repair shop...... the ruins... the Shipyard... Piles of rubble and twisted metal..."
The housing stock of the city was destroyed more than 80%.
The population of Gomel at the time of release (27.11.1943 g) was less than 15 thousand inhabitants. (For comparison: before the start of the great Patriotic war Gomel had more than 140 thousand people).
A month later, on 26 December 1943. – Gomel hosted a citywide rally. It was accepted greeting the workers of the city to the commander of the Belarusian front, General of the army K. Rokossovsky and expressed deep gratitude to all the soldiers and commanders of the troops entrusted to him for the liberation of Gomel from the Nazi occupiers. In the liberated city of profit of the Central Committee of the Communist party(Bolsheviks) and the government of Belarus.
During the Gomel-Rechytsa operations troops Belorussian front broke through the enemy defenses in the swath width of 100 km, moving to the West at 130 km, threatened the southern flank of army group "Center" and hampered its interaction with the group army "South".
During the Gomel-Rechytsa operations gave his life 21650 soldiers, commanders, political workers. Did not live to see the light of day of liberation of hundreds of partisans and underground fighters, 66556 soldiers received various degrees of wounds and contusions.
The battle for Gomel, which began the liberation of the Byelorussian SSR is an outstanding feat of the Soviet army and the people's Avengers in the difficult combat with the German fascist invaders.
Gomel remember the sacred of the heroes of the last war. Their names are named streets of the city.
The eternal flame at the square of Labor, monuments and obelisks on the streets, in parks, squares will always recall the feats of arms of warriors-liberators.

Information prepared by the Department of ideological work,
of culture and youth Affairs Gomel city Executive Committee
together with experts of the institution "Gomel regional Museum of military glory" 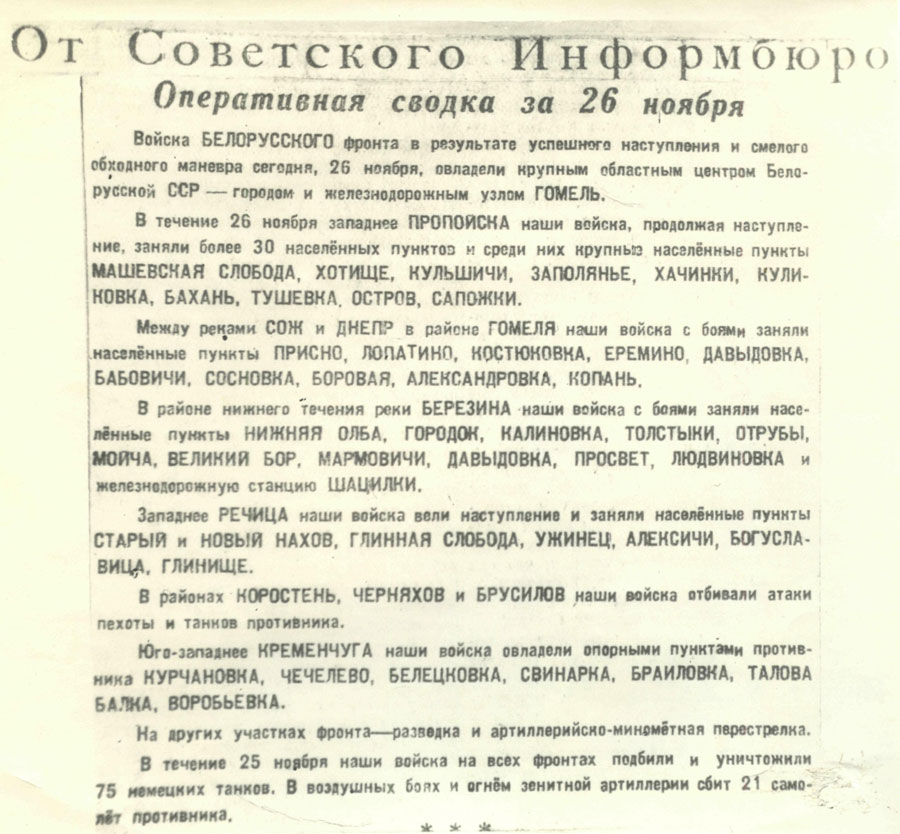