The House No. 12 in Sovetskaya street is a 3-storied U-shaped symmetrical axial building. The floors on the facade are separated by cornice belts, and the blades conditionally divide it into three parts – the central and two side. The display windows of the first floor are interspersed with paneled blades. The shoulder blades on the level of the second and third floors are richly decorated with cross-shaped panels, garlands, balusters, semi-columns shaped and with flutes. The shoulder blades of the side parts are completed with nich sculptures in the form of peasants with nature gifts. The main entrance to the building is covered with a second-floor balcony on massive consoles with a garland of acanthus leaves. Balconies are also located on the second and third floors of the side parts of the facade. Window and door openings on the second floor are marked with sandricks with semicircular pediments, on the third floor they have an arched shape with a profiled archivolt. The frieze of the entablature of the central part is designed as an arcature belt. The side parts are completed with towers with loopholes decorated with semi-columns. The internal layout is enfilade, the interiors do not represent a particular value.

The combination in the appearance of the structure of the elements of the so-called. The “Russian style", Renaissance and Baroque motifs allow us to attribute it with full justification to the examples of eclectic architecture and date it to the border of the XIX-XX centuries.

Sovetskaya Street (former Rumyantsevskaya) began to form in the XVIII century, and finally developed in the second half of the XIX-early XX century. It became the main street of the city, where a number of apartment buildings were being built. Their first floor was occupied by commercial and economic enterprises, and the premises of the remaining floors were rented out as apartments. House No. 12 in Soviet Union street belonged to this type of building. Before the Great Patriotic War, the first floor was occupied by commercial institutions, and the second and third floors were used as dwelling.

During the war, the building was damaged and restored in 1950. Measurement drawings and photographs taken by German prisoners of the war after the liberation of Gomel indicate that the external image of the house has changed somewhat compared to its pre-war appearance: instead of the passage to the courtyard, which was located to the right of the entrance to the house, a showcase window appeared, which added symmetry to the facade, pilasters in the form of a female half-figure between the paired windows of the second floor, finishing the side parts at the consoles of the central balcony, parapet and balcony metal grilles were changed. 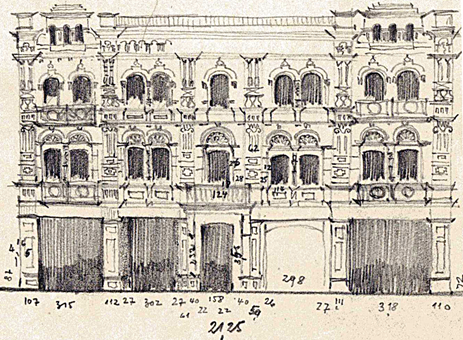 Sovetskaya Street, house No. 12. Measurement drawings of the 1940s, made during the preparation of the restoration project. From the funds of the GIKU Museum "Gomel Palace and Park Ensemble". 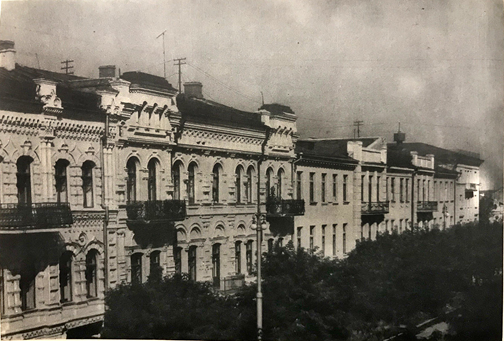 Sovetskaya Street, house No. 12 (second from the right). The Photo from the album “Gomel in photo illustrations”, 1961. 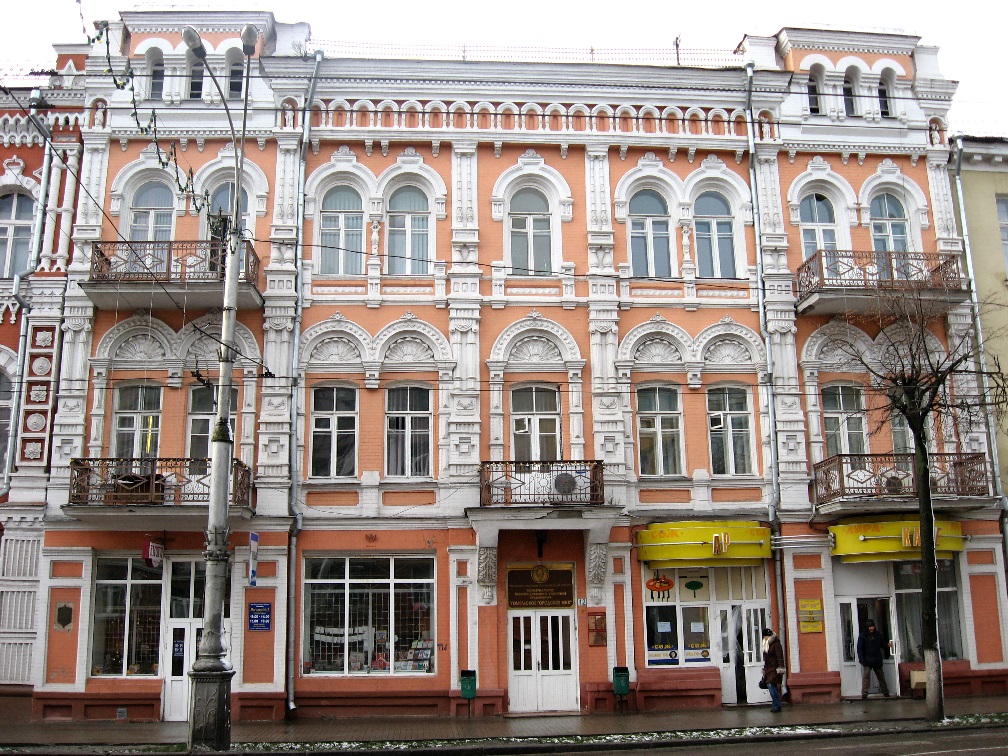