The brick three-storey building in which JSC ”Old Department Store " is located is in the historical center of the city of Gomel, at the crossing of Sovetskaya and Kommunarov streets.

The main facade of the building faces Kommunarov Street and has a symmetrical structure. The facade to Sovetskaya Street looks like the central one, except for the entrance group. Visually, it is divided into two tiers: the first is the 1st and 2nd floors, the second is the 3rd smaller floor, separated by a corbel course The influence of neopalladian pattern can be traced in the architectural decoration:.

3) dissection of facades by pilasters;

4) the unity of the interior and exterior (through the display window areas);

5) the presence of an attic floor (in this case the 2nd floor is in its role).

The central part of the facade is occupied by the entrance group in the form of a stylized Palladian window (on the 1st floor there is a three-part window area, the completion of which is a through lunette on the 2nd floor). The decoration of window areas adds to the external grace of the building. The display windows of the first tier vertically visually resemble "ribbon" glazing, inscribed in the segments of the archway. The vertical accent is supported by the lesenes passing through the entire facade. Smooth on the first tier, on the second they are decorated with a ribbon of medallions decorated with floral ornaments. Under the flat roof there is a wide cornice with rectangular brackets.

The capital building of the early twentieth century, which was located at the corner of the streets, has been preserved only in photographs. In 1911, in its place, according to the project of Stanislav Shabunevsky, the Savoy Hotel was built at the expense of the Shanovich brothers. The decorative design of the facades was dominated by linear-graphic principles of decoration. The artistic effect was achieved through simple, laconic means. After the revolution, there on the ground floor was the Palace of Labor in 1920-23, in 1923 the Gomel office of Dobroflot, later-the Gomel Executive Committee. The hotel was destroyed during the Great Patriotic War. After the war, on the site of the hotel the city square was located.

Since 1959, the building has not changed its purpose. 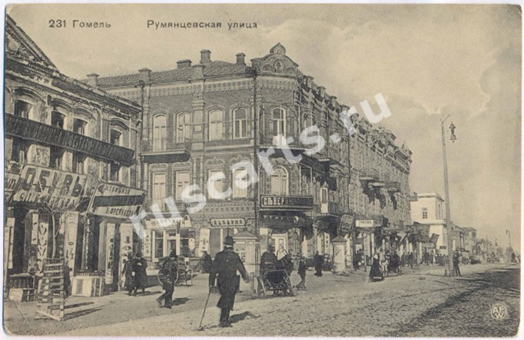 Rumyantsevskaya Street (now – Sovetskaya). The first one on the left there is a commercial apartment building, the predecessor of the Savoy Hotel. Postcard of the early twentieth century. 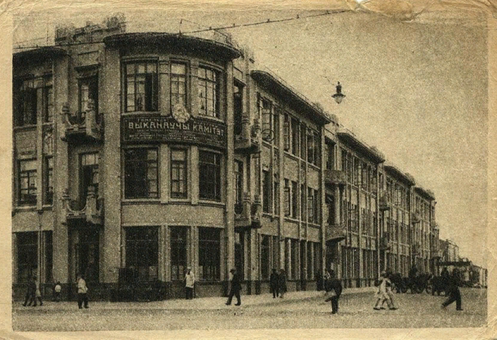 Sovetskaya Street. The building of the City Executive Committee, the former Savoy Hotel. A postcard from the 1930s.

The corner of Sovetskaya and Kommunarov streets. The square is on the site of the former city executive Committee-the Savoy Hotel. Photos of the 1950s. From the archive of JSC "Gomelgrazhdanproekt". 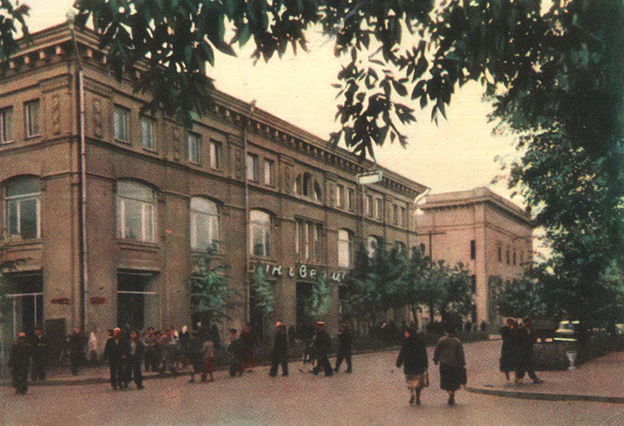 The corner of Sovetskaya and Kommunarov streets. The department store building. Postcard from 1961 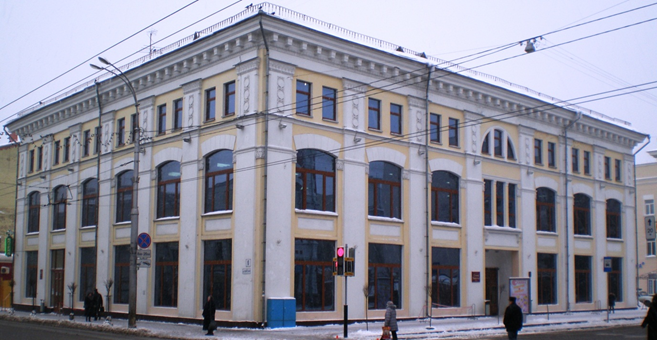 The corner of Sovetskaya and Kommunarov streets. The department store building. Photo of 2011
Gomel region
Belarus