The house is a three-storey T-shaped building. The main facade of the symmetric composition is vertically subdivided into the central and two lateral parts, in the form of shallow risalits. The first floor with horizontalrust is separated from the second floor by narrow profiled traction. The risalits, starting from the second floor, are decorated with lesenes with a large number of decorative geometric elements and are completed by attics of rectangular shape with blind arcading and bows of dentils. On the second and third floors of the risalits there are balconies. The symmetry axis of the central part of the facade is marked by wider window openings, flanked lesenes (rusticated on the second floor and with narrow panels- on the third floor) with denticulate cornices. The same blades are placed near the risalits. All the windows are located in shallow niches, which are decorated from above with notched friezes (on the second floor) or arcature friezes (on the third floor). There are rectangular panels below the windows of the second floor, and there is a curb below the windows of the third floor. The central part of the building is completed with a dentils corbel and a rectangular attic decorated with panels. The interiors of the monument do not represent a separate value.

Sovetskaya (formerly Rumyantsevskaya) street is one of the main highways of Gomel. It was formed in the second half of the XIX-early 20th century when it became the main street of the city. 2-3-storey tenement houses were owned by private individuals, and besides  owner’s apartments they  housed business enterprises on the ground floor ; the premises of the other floors were rented as apartments. House № 18 in Sovetskaya street functioned like this as well.

Before the beginning of the Great Patriotic War, the building housed the Gomel Financial College of the Ministry of Finance of the BSSR. At that time, there was a rectangular extension to the main building in the courtyard.  As a photograph of the 1940s taken from the funds of the Museum of the Gomel Palace-Park Ensemble witnesses, the house received minor external damage during the war and it was restored in 1949. At the same time, the porte-coshere at the right side of the building was closed. Instead, a wide main entrance appeared on the facade. In 1957, by an act of the Council of Ministers of the BSSR, the building was transferred to the Ministry of Culture for the Gomel Music School (now - educational institution "Gomel State College of Arts named after N.F. Sokolovsky"). In the 1960s, additions to the pre-war volumes of the monument were made to the courtyard area. 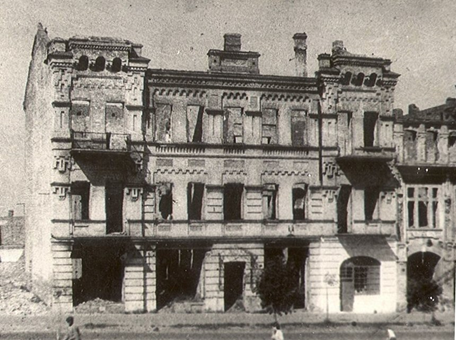 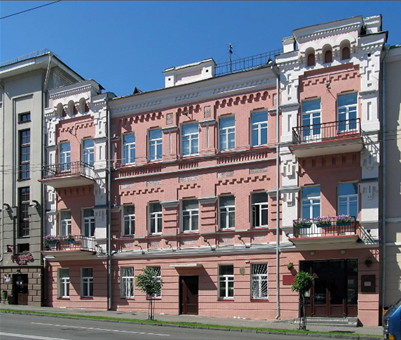