The house is a four-storeyed brick structure, which faces Sovetskaya street. It has a semicircular corner rounding and is adjacent to the house in Komsomolskaya street, together they merge into one unit. You can notice classic tendencies of the past in the dimensional arrangement and decor of the building.

The main facades of the house from the side of Sovetskaya and Komsomolskaya streets are solemnly decorated with an emphasis on the corner part. At the third and fourth levels, it is represented by a stylized portico with six ionic half-columns under a stepped rectangular attic and a frieze with embossed stucco garlands. The facades are vertically separated by three shallow projections: two flank the part along Komsomolskaya street, the third closes the facade from Sovetskaya street. The risalits on the level and on the third floor end with stylized porticoes with balconies flanked by ionic semi-columns under third triangular pediments with a frieze with embossed stucco garlands.

The first two floors of the street facades are decorated with rustic wood and are horizontally separated from the upper floors by profiled traction. Plastic art of the ground floor in Sovetskaya street is conveyed by rhythmically alternating arched and rectangular display windows and entrance doors of trade establishments. The openings are decorated with keystone, rusticated archivolt, cornices and modillions.

Sovetskaya Street (formerly Rumyantsevskaya) - the compositional core of Gomel - was finally formed in the second half of the XIXth and early XXth centuries. During the Great Patriotic War a significant part of the buildings was destroyed. A striking example of the post-war architecture of the city are the houses numbered 36 and 38, erected by the architect Valentin Filippovich Zhdanovich. House number 38 was built in 1956. There have always been residential apartments from the first to the third floor. On the ground floor of the building there were social and household facilities: a canteen and a furniture store. Now the ground floor is occupied by catering facilities. 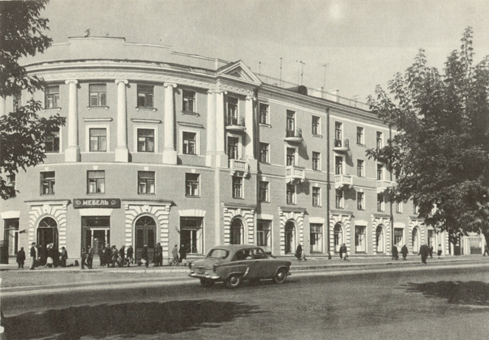 38, the corner of Komsomolskaya and Sovetskaya streets. Photo of the 1960s. 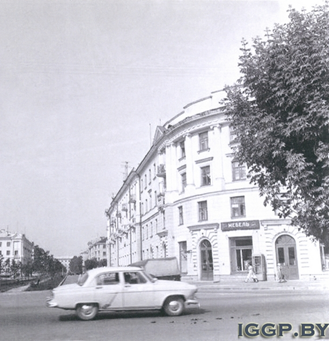 38, the corner of Komsomolskaya and Sovetskaya streets. Photo of the 1960s. From the archives of JSC "Gomelgrazhdanproekt". 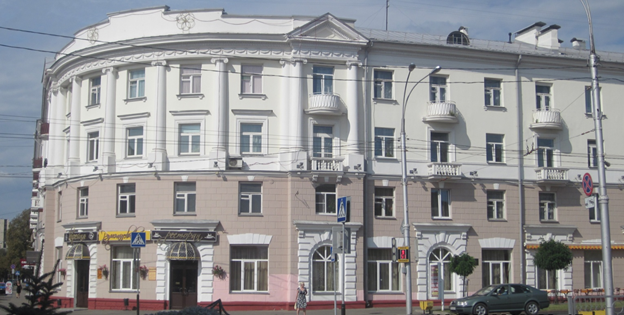 38, the corner of Komsomolskaya and Sovetskaya streets. Photo of 2013.
Gomel region
Belarus