The house is a four-storey brick house with a semicircular corner rounding. It is connected to the neighboring house in Komsomolskaya street and forms a single volume. The building in a volumetric-spatial compositional solution and decorative design was made with clear stylistic features of the historicism direction prevailing at that time. The main façade, facing Sovetskaya and Komsomolskaya streets, is solemnly decorated using classicist motives. The emphasis is placed on the corner part, which at the level of the third and fourth floors is framed by a wide stylized portico with six Ionic semi-columns under a stepped rectangular attic and a frieze made of embossed stucco garlands. The facades are vertically separated by three shallow projections. One risalit is located on the left side of the facade in Sovetskaya street, two others - in Komsomolskaya street. At the level of the third and fourth floors, they end with stylized porticos with balconies, franked with Ionic semi-columns and covered with triangular pediments with a frieze of embossed stucco garlands.

The first two floors of the facades are horizontally separated from the upper floors by a profiled rod, their decoration imitates a large installation. The first floor is distinguished by the rhythmic alternation of arched and rectangular display windows and entrance doors of trade establishments. They are decorated with a keystone, rustic archivolt, sandrikas and modulons.

At the level of the first floor, on the left side of the building, there is an entrance to the courtyard area, made in the form of two symmetrically located portals, one of which is connected to the building. The portals have semicircular arched openings with metal gates in the form of a lattice and lunettes on top. The decor of the portals is made in the same style as the first floor of the house.

Earlier, on the roof of the house, on both sides of each pediment, there were completions in the form of obelisks, which are now lost. Compositionally, house no. 36 forms an architectural ensemble with house no. 38.

Sovetskaya Street (until 1919 - Rumyantsevskaya Street) - the compositional core of Gomel - was finally formed in the second half of the XIXth and early XXth centuries. Before the war, the building of Rotner's private gymnasium had been located on the site of house No. 36. It was badly damaged during the war and was not rebuilt. In its place in 1952, according to the project of the architect Valentin Filippovich Zhdanovich, a residential building was erected, on the ground floor of which there were social and domestic facilities. Since the 1960s in one of the premises on the side of Sovetskaya Street a children's clothing store "Beltorgovlya" has begun to work. For a long time at the corner of the house there has been a bread shop "Solnechny". Premises from the second to the fourth floor, as before, are used as residential apartments. 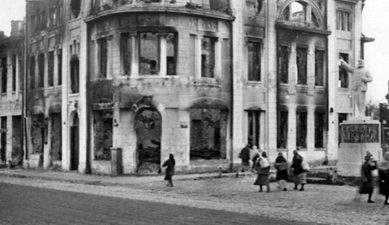 The corner of Lenin (Komsomolskaya) and Sovetskaya streets. The building of the former Ratner gymnasium. Photo of the 1940s. 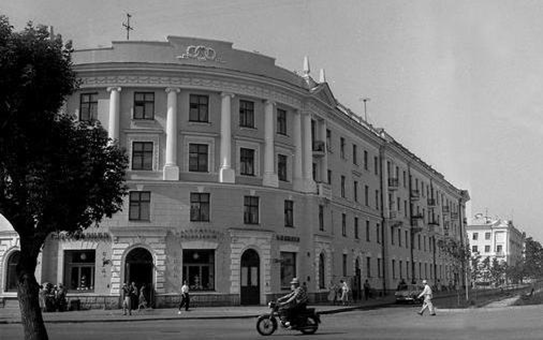 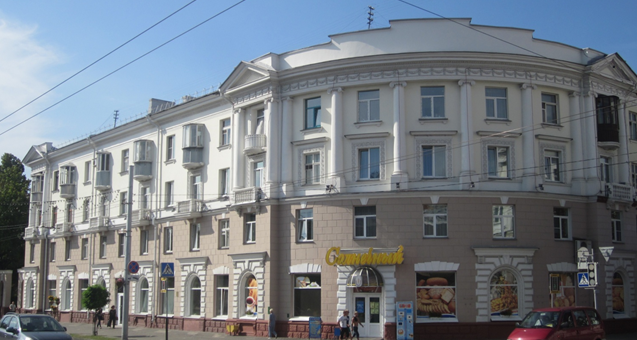