Significant changes in the socio-economic situation of the Russian Empire and technical progress led to fundamental changes in the housing construction of Belarusian cities at the beginning of the twentieth century. New clients of architects - merchants and industrialists - paid attention to both the representativeness of the buildings and their practicality. The eclectic aesthetics with its spatial and planning expediency and facade decorativeness met these requirements. Building at 34a, Sovetskaya street is an example of eclectic style. The house is brick, rectangular in plan, with a low basement. Almost the entire volume on the ground floor level is decorated with rustic wood. The windows of the first floor have the shape of a three-center arch, the windows of the second are rectangular. The front entrance group, decorated with a risalit with an attic, gives expressiveness to the main facade. The risalit is flanked by rusticated shoulder blades; the baroque trefoil pediment frames a ribbon cornice, which is a continuation of the shoulder blades. The entrance group is consonant with the window openings of the second floor and the attic (the upper part is arched - a through rest, the lower part is rectangular - a doorway / tape glazing). The left corner of the central façade is complemented by a bay window in the style of a Romanesque tower with a round window. A fragment of the unplastered wall under it imitates masonry. The courtyard facade is flanked by two more bay windows, but without a hipped roof.

The frieze of the building is decorated with a belt of panels with a circular pattern in the center.

In the block opposite the city boulevard there were the houses of the city elite. At the corner of Rumyantsevskaya and Aleksandrovskaya streets (now - Komsomolskaya) there was a brick three-storey house of S.D. Shabunevsky (here on the 2nd floor there was a private male Ratner gymnasium). Nearby is the house of the Shanovich brothers with a post and telegraph office. The Ivitskikh family lived in the house to the left of the telegraph office, further away - the house of Mr. Leikin. At the corner of the block was the house of the schoolboy L.S. Vykhodsky, in the future - a well-known Soviet psychologist. The quarter was built at the beginning of the 20th century. Probably at the same time a house was being erected at 34, Sovetskaya street.

In 1963, a new maternity hospital was opened at 34, Soviet street. In the 1980s-90s in the building at 34a, Sovetskaya str., there was a women's polyclinic of branch No. 10 of the Gomel city polyclinic. Since 2019 the building has been one of the buildings of the Gomel Regional Children's Clinical Hospital. 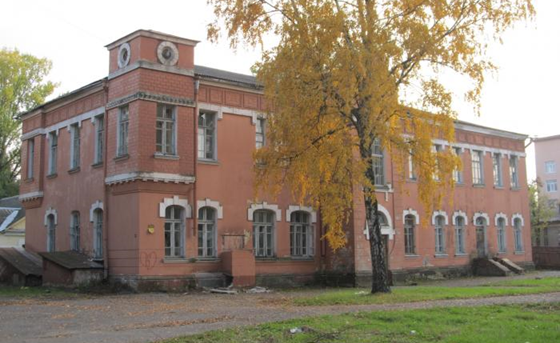