The development of the credit system significantly influenced both the life and the appearance of the cities of the Russian Empire. The abolition of serfdom and especially the railway construction revived the economic life of Gomel. The existence of a full-fledged financial institution became an urgent need. It contributed to the opening of the first local proper Belarusian bank in Gomel. The Senate Decree on the creation of the City Public Bank was signed on January 8, 1870. The capital of the bank was created at the expense of the city budget. It majored in financing of urban construction. It should be noted, that the State Bank with the right to issue commercial loans opened in the Empire just 10 years earlier.

By the end of the XIXth century Gomel has become a major credit centre. Several bank buildings decorated the central street of the city, including the branch of the Orlovskiy Commercial Bank. The founder of the bank was famous Russian banker L.S. Polyakov. The building of the bank was built at the corner of Rumyantsevskaya (now Sovetskaya) and Irininskaya streets in 1901 according to the project of S.D. Shabunevskiy. In 1908 the building formally changed owners as a result of the merger of three bank groups owned by L.S. Polyakov. The new united bank financed the industry branch. In 1910 a part of the building was given to the City Public Bank. This situation continued until 1917.

After 1917, the “former city bank” housed the offices and shops of the provincial consumer society. During the Great Patriotic War the house was destroyed. It had been restored by 1948, with a third additional floor, which was used as the building of the Gomel Regional Executive Committee. Other administrative institutions located here after the construction of a new building of the Regional Executive Committee (1970), in the house at 28, Sovetskaya Street. This situation continues today.

The building of the former Orlovskiy Commercial Bank is L-shaped 3- storey (previously 2-storey) volume with asymmetric spatial composition with significant development along Irininskaya St. The exterior of the building corresponds to the style of historicism, which was one of the most popular at the beginning of the 20th century. The facade of the corner part with an arched pediment is as an architectural dominant. Rustic pilasters, the main entrance with a portico of a daric order give elegance. A tower with a dome give an additional accent and element of balance in the composition. The tower subjugated the surrounding 2-3-storey building for a long time. The theme of the arch is developed by niches on two floors, flanked by pilasters with rustication (along Iriniskaya St. and on the corner part) and a corinthian order (on Sovietskaya St.), a through lunette in the attic.

Vertical division of the facade along Irininskaya St. is marked by pilasters with a large rustication between windows (on the first floor it goes over to the walls) and with a small rustication, bordering risalits (another vertical accent) with balconies. With a considerable length, the front facade has retained its unity with the central part due to variations in decorative elements.

The facade in Sovetskaya St. has a more restrained plastic. Rusticated pilasters flank only wider window openings, the window decoration was slightly changed.

At the corner of Sovietskaya St. and Irininskaya St. The building of the branch of the Orlovskiy Commercial Bank. Postcard, the early XXth century. 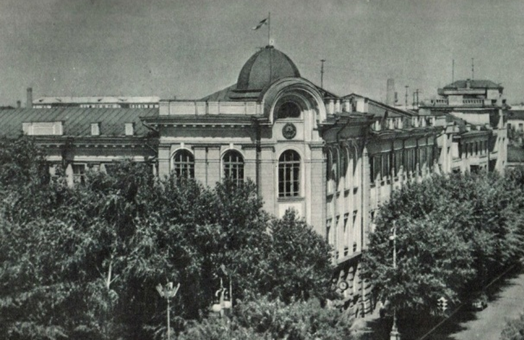 At the corner of Sovietskaya St. and Irininskaya St. The building of the Gomel Regional Executive Committee. Photo from the album “Gomel in Photographic Illustrations”, 1961.
Gomel region
Belarus