House 11 in Sovetskaya street is a three-storeyed rectangular building which is situated at the crossroads with Lange street. The main place in the volumetric-spatial construction of the house is assigned to the corner part and the facade from the side of the Sovetskaya str. They are highlighted with rusticated shoulder blades, a peculiar design of arched windows on the second floor (rusticated platbands, triangular sandriks and three-part rectangular panels), two triangular attics with through lucarnes on the corner part of the roof. The first floor with rusticated walls and windows decorated with castle stones is separated from the second by a narrow cornice belt.

The windows of the second floor are covered with profile archivolts with castle stones, the balconies have balusters. The windows of the third floor have modest profile brick skirting boards. The roof is metal, hip. Under it there is a wide cornice with a belt of dentils. The artistic solution of the building is dominated by the features of classicism.

Sovetskaya street is one of the main motorways of Gomel. Its formation began in the 18th century, then continued in the 19th century, and finally finished in the second half of the 19th – beginning of the 20th centuries. At that time, Rumyantsevskaya str. became the main street of the city, in which its commercial, business and social life was concentrated. In 1-3-storeyed buildings that belonged to private individuals, apart from residential apartments, there were numerous shops, hotels, catering establishments, workshops, and offices.

House 11 in Sovetskaya street refers precisely to this type of city building. A photograph of the 1940s from the funds of the Gomel Palace and Park Ensemble Museum of the State Institution of Culture attests that the original appearance of the monument was significantly different from the modern one. The building was two-storyed, there was no rustic decor in it, some windows on the second floor had a lancet configuration, which gave the volume as a whole the features of historicism with the use of Gothic elements. This suggests that the house could have been built in the mid-early second half of the 19th century.

During the Great Patriotic War, the building was significantly damaged, in 1950 it was restored. At the same time, the third floor was built on, the number of windows changed, on the second floor they all acquired an arched shape, rustic stones, sandriks, etc. appeared in the decor of the facade. The monument has lost the features of historicism and acquired the stylistic features of classicism. 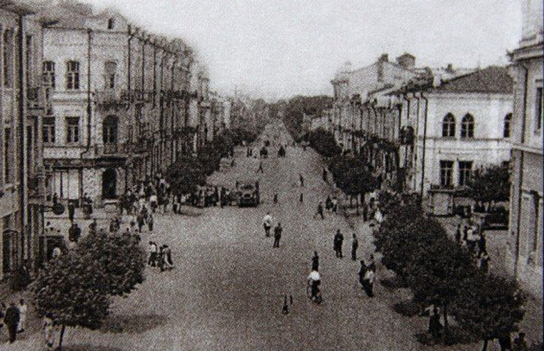 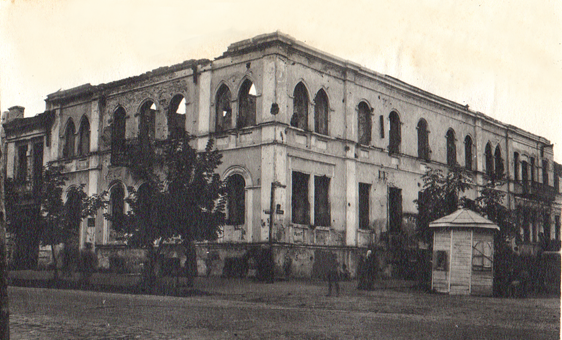 The corner of Sovetskaya and Lange streets.11 Sovetskaya str., 1940s. From the funds of the museum GIKU "Gomel palace and park ensemble". 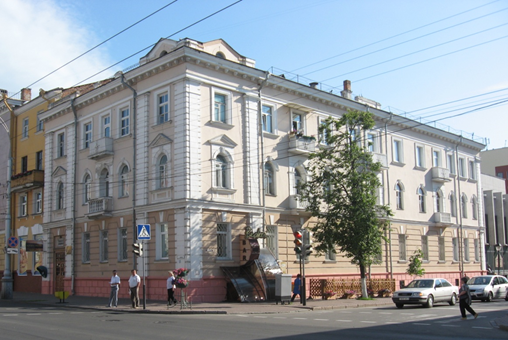