The estate at Pushkin Street, 32, is known as the" summer house "for the residence of Count M. P. Rumyantsev, "hunting lodge", "house in the garden". It was built in 1818-22 by the architect Ivan Dyachkov. It was rebuilt from a "store (warehouse) of Gomel goods". Wooden walls on a stone foundation were faced with bricks and plastered (in the XIX century-this is a way to "give nobility"). The house was (and is) a one-storied building, in the plan – a rectangle. The main building was later flanked by stone outbuildings with finely divided attics.

The main facade is the "meeting point" of three ray streets-Pushkin Street, Lange Street and Biletsky Street. It was based on one of the samples presented in the album "Collection of facades by His Imperial Majesty highly tested for private buildings in the cities of the Russian Empire" (architects V. P. Stasov and L. Ruska). In the center there is a 6-column Doric portico with a terrace above it. Paired outermost columns mark the entrance to the building. The compositional accent is a mezzanine with a lunette window and a staircase attic. The facade decor is complemented by rust (the mezzanine, the central part of the facade and the extension) and bas-reliefs (on the sides of the mezzanine window).

I. Dyachkov did not refuse the architectural interpretation of the sample from the album. He gave it the features of romanticism (the convergence of the side columns, the reduction of the dimensions of the volume itself, rustication and a large keystone of the mezzanine window) and the Grecophile style (fluted columns in the archaic Doric order, "Hellenic" reliefs with features of archaeological identity instead of the side windows of the mezzanine). The details of classical architecture created the illusion of a solid stone structure ( it looks the same today).

The interior of the estate was developed by the developer independently. The layout is enfiladed, the dimensions of the premises are small in accordance with a popular engraver Sh.-N. Koshen: "The higher the social status of a person, the smaller his rooms are."

In 1838 ,the "house in the garden" was transferred to the military engineering department. Around the 1860s, the Krushevsky family became its owner, later the Lisovsky family. After 1917, the building housed the CHEKA, and since 1927-the city radio center. After the Great Patriotic War, a radio station worked in it again for some time. Since the 1950s, the estate has combined the functions of a residential building and an administrative institution. Around the 1970s, it began to be used only as an administrative building. In 1993-97. the restoration of the building was carried out, after which it housed the exposition of the art department of the Gomel Regional Museum of Local Lore (now the Museum of the Gomel Palace and Park Ensemble). Since 2009, the State Institution "Museum of the History of the City of Gomel"has been located in the monument. 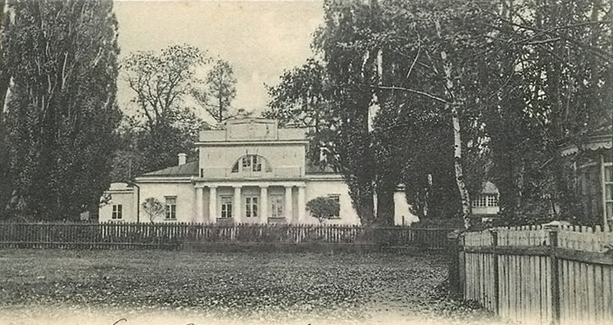 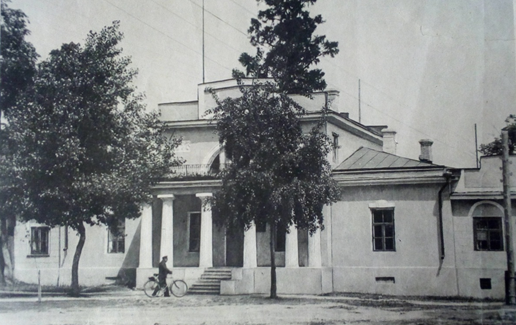 Pushkin Street, house No. 32. Photo from the album “Gomel in photo illustrations”, 1961 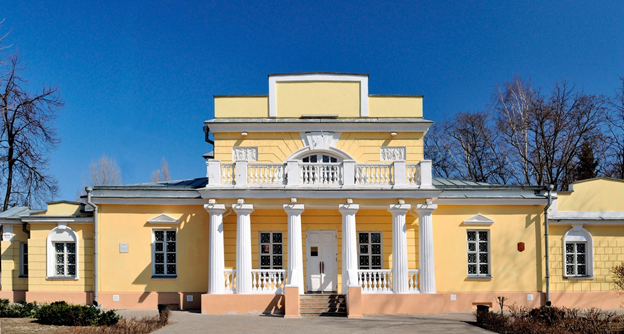