The building is three-storey, has got three entrances and is "P" -shaped in plan. There are no front porches on street facades. In the centre of the facade from the street. Sovetskaya previously had a through passage to the courtyard. Built to reuse design. Style-neoclassicism, or "Stalinist Empire". The planes of the facade of the first floor and corner parts at the level of 1-3 floors are decorated with rustic wood. Corner entrances provide access to public premises located on the ground floor and highlighted on the façade by display windows. The first floor is separated from the second floor by a profiled rod.

The windows of the second floor have profiled platbands, which alternate with a more sophisticated version - with rusticum and keystone. At the same time, there is an option from the side of Sovetskaya Street is additionally distinguished by rectangular sandrids. All windows on the second floor are also decorated with stucco panels with a rosette. The windows of the third floor are decorated with profiled window sills on cube brackets. The exits to the balconies of the third floor, as well as the windows of the corner parts, are highlighted with gable sandrids. Balcony slabs with a profiled end in the plan have the shape of a trefoil, balconies are forged railings. The building is surrounded by a profiled cornice with denticles. The corner parts of the house are highlighted by attics, in the center they have a round window in a stucco casing. The torn gables are supported by pilasters with stucco moldings with plant motifs. On the sides of the attic there are “S” -shaped elements lying on a rectangular base with a panel. Sovetskaya Street (formerly Rumyantsevskaya) is one of the main thoroughfares of Gomel. It was formed in the second half of the XIXth - early XXth centuries, when it became the main street of the city.

Apart from the owners' apartments, 2-3-storey apartment buildings belonging to private individuals housed trade and economic enterprises on the ground floor, and the premises of the remaining floors were rented out as apartments. At the very end of the street there were one-story private wooden houses. Before the start of the Great Patriotic War, at the place where building No. 58 in Sovetskaya Street is located, there was a one-storey wooden building, and also diagonally Sovetskaya Street Nikolaevskaya (now Dokutovich) Street began. In 1953, a three-storey house was built on this site. It was originally numbered 110.

From the 1950s to the 1970s. the house belonged to Melkombinat 8. From 1953 to the present, a pharmacy is located on the ground floor. In addition, other institutions are located on the first floor, and the second and third floors are residential. 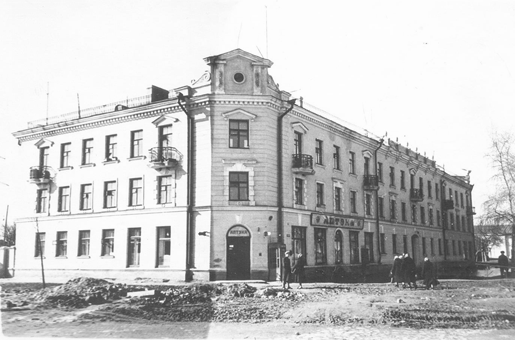 At the corner of Sovetskaya and Rogachevskaya streets. Building 58 in  Sovetskaya Street.  Photo of 1958. From the funds of the State Artistic Cultural   Establishment “The Museum “Gomel Palace and Park Ensemble”. 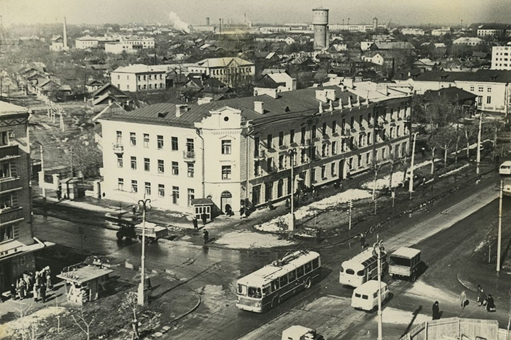 At the corner of Sovetskaya and Rogachevskaya streets. Building 58 in Sovetskaya Street.  Photo of the 1960s. 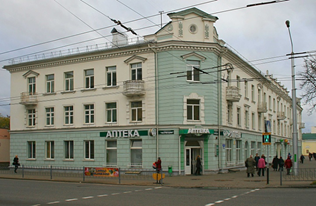 At the corner of Sovetskaya and Rogachevskaya streets. Building 58 in Sovetskaya Street. Photo of 2015.