The house is a four-storey, rectangular, symmetrical, axial building. The facade is divided horizontally by a cornice belt between the ground and first floors. The building has a rather high plinth, which is rusticated to a coarse stone, as is the ground floor plane. The architectural decor of the house is discreet. It highlights the balconies of the second and third floors. They are accentuated on both sides by blades supported by heavy profiled eaves at the third floor level. Above these are the fourth-floor window openings in rectangular architraves. The windows on the first floor are connected by a narrow arch, also decorated with rectangular profiled architraves, two vertical narrow blades at the bottom and covered by a profiled cornice. A denticle belt runs under the roof of the building.

Sovetskaya Street (former Rumyantsevskaya Street) is one of the main thoroughfares of Gomel. Its formation began in the 18th century, continued in the 19th century, and finally took shape in the second half of the 19th and early 20th centuries. A significant part of the pre-revolutionary buildings was seriously damaged during the Great Patriotic War and was not restored after it ended.

As evidenced by maps and photographs from the second half of the 1940s, immediately after the war there were brick boxes of two buildings between the houses with modern numbers 11 and 15. These were replaced by house number 13 in 1958. As most of the buildings on the main streets of Gomel at that time, the architectural decor of the building incorporated elements of neoclassicism. In 1959, a bread shop "Dukhmiany" started operating in one of the premises of the house from Sovetskaya Street. 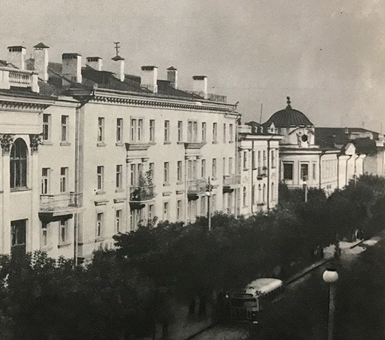 13 Sovetskaya Street (second from left). Photo from the album "Gomel in photo illustrations", 1961. 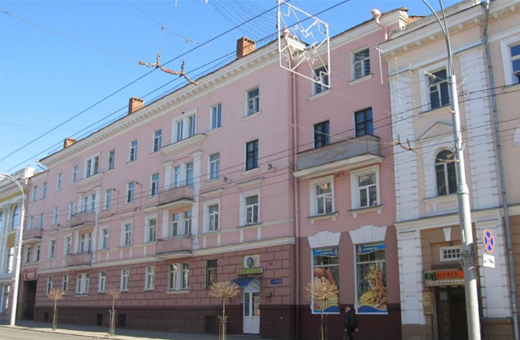