The buildings of the "March, 8th" factory are built in the style of the "Stalinist empire".

Represent a 3-storeyed volume, L-shaped in plan, the angle of which is decorated with 8-floor tower. The rhythm of the facades of the buildings forms a series of blades, the shutters of which fill rectangular window openings, on the ground floor additionally sunk into arched niches in the street. The Soviet facades of the buildings are united arched three-part propylaea with metal gates. Above the propylaea there is a round medallion with a 5-pointed star and crossed flags beneath it.

The architectural dominant of the building is the corner tower - a square in plan 8-tier volume (42.8 m with a spire). The decor of the facade begins on the 6th tier separated by a cornice with square caissons delimiting pilasters with multidisciplinary capitals. Pilasters continue on the 7th tier, where their capitals enlarge and merge almost completely into one line. In the shutters arched windows are inscribed between them. The 8th tier is represented by a belvedere in the form of 8 - a curb surrounded by a square parapet with pedestals and a ribbon of metal floral pattern, each corner of which is crowned by a baluster. The walls are decorated with arched windows connected by a simple cornice at the level of the arches. The tops of the roof are decorated with conical balusters. Belvedere crowns the spire with a star height of 3.2 m.

The new master plan of the city of Gomel in 1946 designed the main square of the city at the intersections of Sovetskaya and Pochtovaya streets (now - Pobeda Avenue),

thus connecting the administrative centre with the station. The choice of the area was determined by its dominant elevation. Buildings of the northern and the north-eastern side of the square, with the exception of the White Barracks, were to represent a public building with a tower that would overlook the corner of Sovetskaya street and would be visible throughout its distance, starting from the park named after A. Lunacharsky.

However, in 1949 at a meeting with the Chief Architect of Gomel instead of public buildings it was already planned to build factory buildings of “ March, 8th ”(at that time it was located in the so-called“ white barracks ”). A lot of issues were caused by the mandatory erection of the tower as one of the architectural dominants of the city’s main thoroughfare. In the early 1950s the question of external finish of the “March, 8th” factory was raised again. The project by architects E.A. Estulin and A.I.Kasyakov was accepted, though with some technical remarks. The final project of the buildings of the factory "March, 8th" together with water tower at 65, Sovetskaya street (at that time) was approved in 1951.

Thus, the construction began no earlier than in 1951, the year of completion could not be found in the documents. It is also difficult to determine how long the tower was used as a water tower. Maybe it started right away to combine technical and administrative premises. Today the building with a tower in Sovetskaya street can be classified as a complex building by its function which houses both administrative and commercial premises. 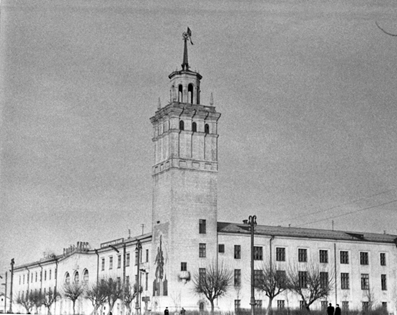 41, Sovetskaya street. View of the tower and the building of the factory "March, 8th". Photo of 1960. From Andrei Karneev’s archive 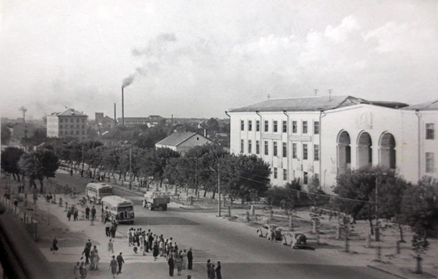 41, Sovetskaya street. View of the gate and one of the buildings of the factory "March, 8th" (on the right). Photo of 1960. From Irina Lukyanova (Popova)’s archive.
Gomel region
Belarus