The building is three-storeyed, T-shaped in plan. The main facade overlooks Sovetskaya street, and is symmetrically decorated with two wide projections, on which the main architectural dominants are narrow high (on the first and the second floors) window openings (on the left projection - two), which are vertically divided into two parts, a semi-columnar part with a base and a capital, stylized in the traditions of ancient Egyptian architecture. The same capitals are crowned with small semi-columns located between the arched windows of the first floor, paired according to the biforium principle. The walls of the ground floor are rusticated, window openings, also arched, are decorated with key stones. The windows on the second floor have a simple rectangular frame. The first floor is separated from the second by a profiled rod, under the roof there is a belt of sparsely located denticles. The facade from the side of the Pobeda Avenue continues the decor and rhythm of the window openings of the main facade until the transition to the modern extension. The roof is metal and of complex shape.

The exterior design of the monument combines the dominant features of classicism with individual elements of the Romanesque style.

The construction of Sovetskaya street took place in several stages. Until the Great Patriotic War a large number of buildings of the XIXth - early XXth centuries remained on it, especially in the area of ​​the historical centre. Farther from it, on the site of ordinary development of the outskirts, new residential and social buildings were erected. At the beginning of 1930, the presidium of the city council instructed the district engineer Shabunevsky to develop a project of a bath and a laundry for the city with a choice of a site for construction within 10 days. Soon “Polesskaya Pravda” wrote about the approval of the project. A bathhouse and a laundry at the corner of Sovetskaya and Pochtovaya streets (since 1957 - Pobeda street.) were built according to the latest technology; at the same time the institution could accommodate up to 250 people.

S.D.Shabunevsky designed a three-storeyed building in the style of constructivism, flanking it with two projections that mirrored each other. It can be assumed that initially the house was strictly symmetrical in terms of the plan. A photograph from the funds of the Museum “Gomel Palace and Park Ensemble” shows that in 1937-1938 two more were added to the main volume: from the side of the courtyard and along Pochtovaya street. At the same time the symmetry of the facade along Sovetskaya street was broken.

During the Second World War, the building was damaged and was restored in 1950 with the use of Art Deco elements. Since then, it has been on the balance sheet of housing and communal services enterprises. On the ground floor there are shops and cafes. 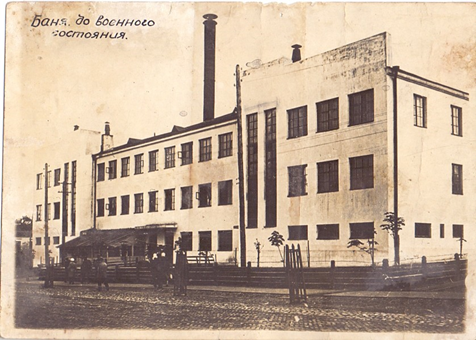 At the corner of Sovetskaya and Pochtovaya streets (now Pobeda Avenue). The building of the bath and laundry complex. Photo of the early 1930s. From the funds of the State Historical and Cultural Establishment “The Museum "Gomel Palace and Park Ensemble".

At the corner of Sovetskaya Street and Pobeda Avenue. 42, Sovetskaya street. Photo of 2010