The two-storey building has an asymmetrical facade, the plastic of which is built on the division of blades and pilasters vertically and belts and cornices horizontally. The plinth of the facade is decorated with niches that match the rhythm of the window openings. The plinth is separated from the first floor by a semicircular rod. The rhythm of the first floor of the main facade is formed by niches separated by rusticated shoulder blades. The niches contain arched windows decorated with profiled archivolts with a keystone.

On the right side of the facade, the blades are wider, between them there are double window openings. A narrow draft serves as the visual boundary between the floors. The rhythm of the second floor of the main façade is set by Doric pilasters, which also outline shallow niches. The niches contain rectangular windows with molded lintels and window sills. On the right side of the facade there is a balcony with double window openings, flanked by two pairs of pilasters. At the level of the roof, they end with a rectangular attic on which a triangular stucco pediment is placed. The entire building is surrounded by a profiled cornice under the roof. Sovetskaya Street (formerly Rumyantsevskaya) is one of the main thoroughfares of Gomel. It was formed in the second half of the 20th - early 20th centuries, when it became the main street of the city.

Apart from the owners' apartments, 2-3-storey apartment buildings belonging to private individuals housed trade and economic enterprises on the ground floor, and the premises of the remaining floors were rented out as apartments. This function could be performed by the house number 50 on the street. Soviet, erected at the beginning of the twentieth century. After the establishment of Soviet power in the city, many houses were nationalized. House number 50 in the 1920s-1940s. belonged to the "Engine of the Revolution" plant, the shops of which were located on the present Knizhnaya street. During the Great Patriotic War until 1942, an underground group of workers operated in the house under the leadership of the Hero of the SSR T.S. Borodin and R. I. Timofeenko, which is immortalized with a memorial plaque on the building. As evidenced by a photograph of the 1940s from the funds of the museum of the Gomel Palace and Park Ensemble, the building received minor damage and was restored in 1948. After restoration, it housed a police stronghold (until 2009), a radio class, a schoolchild's room, a DOSAAF center, and a city special medical examination. Since the 1990s. the building housed the administration of the Gomel regional employment service. Today the state institution "Gomel City Orchestras" is located here. 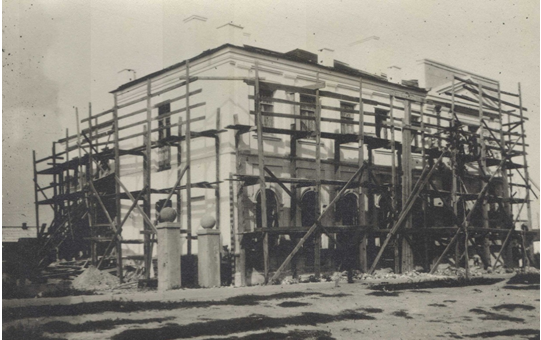 50, Sovetskaya Street. Photo of 1948. From the funds of the State Artistic Cultural Establishment “The Museum “Gomel Palace and Park Ensemble”. 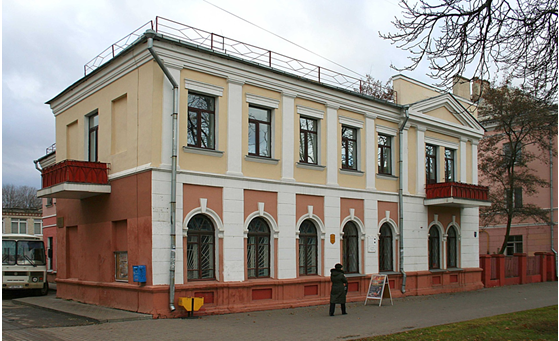