The Sozh Hotel is a brick building with a complex plan and a large, trussed roof; part of the building has a basement. In the solution of the facades of the Central three-storey building (from Sovetskaya Street), architectural plasticity was widely used: belts, cornices with modulons, window frames, window sills and over-sills, rustication of the walls of the 1st floor, rusticated blades, Atiki, garlands. The smooth-surface plinth has a rounded protruding element at the top. At third floor level there are balconies with a steel fence of artistic design. The three-storey symmetrical annex is more restrained, but there is a stylistic continuation through the cornice with modulons, a beltway, sill rails and rustication of the walls of the ground floor. The architectural solution of building No.14 in Sovetskaya Street in Gomel is an example of organic interaction with the previous buildings of the street.

It is known from city guidebooks of the pre-revolutionary period that in the early twentieth century, in Gomel on Rumyantsevskaya Street (now Sovetskaya Street), there was the Feldenbaum House, where the Passage Hotel operated, approximately at the same location as the current hotel building on Sovetskaya Street. The fate of the building after 1917 is uncertain, but it is known that in 1922 it housed the offices of the Provincial Council of National Economy and was listed as No. 18. The building was restored after the Great Patriotic War. An indirect confirmation of that is the information from 1947 about the restoration of the walls and ceilings of the former Passage Hotel in Sovetskaya Street, but now No.22.

According to the 1947 project at 18 Sovetskaya Street, a three-storey volume was built, which symmetrically flanked the walls and ceilings of Building No. 22, raised up to the 3rd floor level, against which both flanks were protruding by shallow risalites. The side facade of the building faced the neighbouring (now No. 12) house and partially mirrored the image of the facade. As a result, a large part of the building deepened into the courtyard, forming an L-shaped plan of the entire development.

The Central Hotel of Gomel was commissioned in two phases. The 1st stage was commissioned on November 7, 1948 and the whole building was finished on May 20, 1950. The hotel had a tailor's shop (ironing and small repairs of clothes) and a garage for 3 cars.

In 1956 the construction of 4 sections of the hotel started on the site of the demolished volume of the former Trinity Church. As a consequence, the L-shaped plan was transformed into a p-shaped plan with access to the corner of Krestianskaia Street. The architect of the project was V. Burlaka. On March 11, 1959, at the meeting of the Gomel City Executive Committee the hotel was renamed Sozh. The Certificate of Acceptance was signed in 1961. 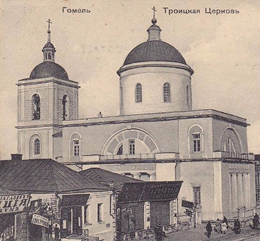 Sovetskaya Street. Building in the area of Trinity Church. Postcard from the early 20th century 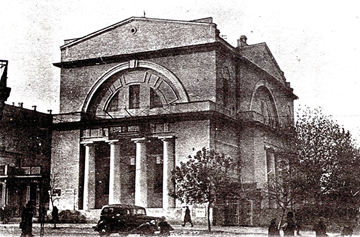 Sovetskaya Street. Aeroclub (building of the former Trinity Church). Photo from the 1930s. 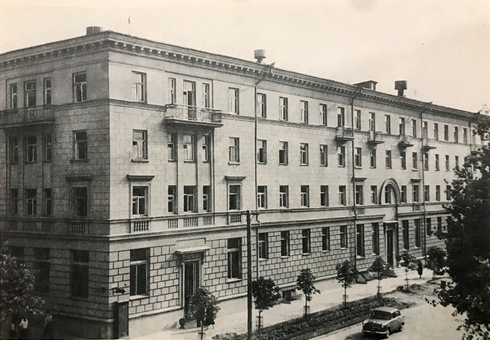 On the corner of Krestjanska and Sovetskaia streets. The building of the central hotel "Sozh". Photo from the album Gomel in Illustrations, 1961.
Gomel region
Belarus