The building is three-storeyed, L-shaped in plan. The main facade has a symmetrical composition. Its accent is the central part in the form of a shallow risalite with balconies in the middle on the first and second floors, a triangular-shaped attic with a rosette lucarne and a figured panel. The balconies are flanked by two wide lesenes with horizontal rusticatio, against which there are rectangular windows with modest profiled sills with dentils. A profiled rod passes over the windows of the 2nd floor of the central part. It forms an arch with a keystone above the doorway of the balcony. On the sides of the central part there are rows of rectangular windows, which on the 1st floor are decorated with profiled platbands and separated by balconies. The walls of the ground floor, in the center of which there is the main entrance to the building, are decorated with shallow Rust. Under the roof there is a profiled cornice with dentils. The interiors of the monument do not represent a separate value.

Sovetskaya Street (until 1919 – Rumyantsevskaya Street) is one of the oldest main streets in Gomel. In the late XIX-early XX centuries it becomes the main street of the city, where its main business and social life was concentrated. Many houses in it were built as commercial apartment buildings, where the ground floor was occupied by commercial and economic enterprises, and the premises of the remaining floors were rented out as apartments. Among these houses there was a building with a modern address 7 Sovetskaya str. The photos of the early XX century and the 1940s, taken after the liberation of Gomel from the nazis, indicate that it was originally a 2-storey building. The ground floor was occupied by all kinds of shops and offices, the first floor was occupied by apartments. The exterior of the building from the Rumyantsevskaya street was significantly different from the modern one and had a modest decor (a belt of dentures under the roof, arched sandricks above the windows of the second floor). In the center of the facade there was a through passage to the courtyard. During the post-war reconstruction of the house, which ended in 1953, the 2nd floor was added to it and the house acquired decorative elements of the classicism style. In 1995, an extension was added to the main building from the courtyard.

After the war, the building first belonged to the factory “Comintern”, then to the association "Garant", since 1995 to JSC "Belarusian Bank for Development and Reconstruction “Belinvestbank”. 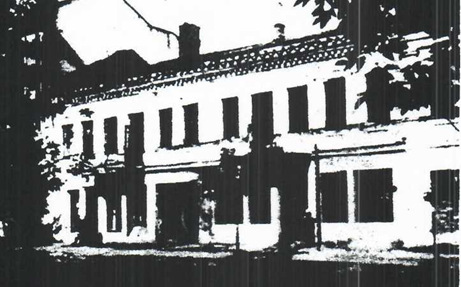 Sovetskaya Street, house No. 7. Photo of the 1940s From the funds of the GIKU Museum "Gomel Palace and Park Ensemble". 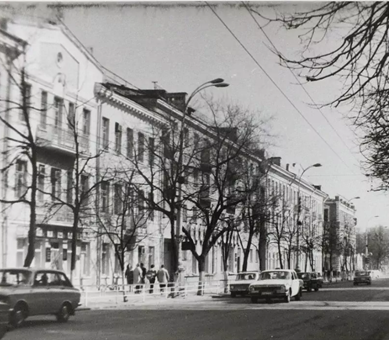