The development of Sovetskaya street

The building is located in the historical center of Gomel, on the corner of Sovetskaya and Krestyanskaya streets. The residential brick house is a 4-storey L-shaped construction. The building was designed in "historical style", which freely interpreted classical motifs. With the help of architectural plastic, a monumental construction effect with heavy side facades was created.

The main facade overlooks Sovetskaya street and has a symmetric structure. Vertically it is divided into three parts: the central and two lateral parts. Horizontally, the facade is divided into two tiers: the first one belongs to the 1st floor with a rusted wall, the second tier refers to the 2nd, the 3d and the 4th floors.  It has smoothly plastered walls and it is delineated by horizontal thrust. Below the hip roof there is a cornice with modillions.

The first tier of the central part of the facade has display windows. The calm rhythm of the rectangular window openings of the second tier enlivenes the tape platbands with arch keystones on the 2nd floor and the vertical accent with balcony ledges with balustrade on the 3rd and 4th floors, additionally decorated with arched doorways and blades on the 3rd floor. The facade is completed with a plate corbel.

The vertical accent of the lateral volume is provided by lesenes with rust on the 1st floor, which pass into pilasters on the 2nd and 3rd floors, the Corinthian capitals of which hold a wide cornice. The arched windows of the 3rd floor are visually connected to the windows of the 2nd floor. The facades of lateral parts are completed with rectangular attics. The left lateral part has a wide basement above which there are three blank lunettes with arch keystones. The right lateral volume is embodied in a shallow risalite and is provided with a balcony ledge with a balustrade in the middle of the second tier.

The decoration of the end walls repeats the decor of the facade, with the difference that the end wall on the left is blank and the one on the right has a courtyard arch.

The house was built in 1952 for workers of the Gomel Thermal Power Station. At the time of its construction the house was given number 27, but already in 1952 it was changed to number 19. According to the post-war plan of Gomel reconstruction a capital multi-storey (3-4 floors) development was planned in a number of streets of the Central District, including Sovetskaya  and Krestyanskaya streets. Residential development in the centre (as it was noted in the design of the building) was also to include some commercial spaces. The ground floor was set to be used for public services and shops. In 2007, the reconstruction of non-residential premises for a delicatessen shop took place. At present, the first floor of the house is occupied by some shops and private business. There are residential apartments on other floors. 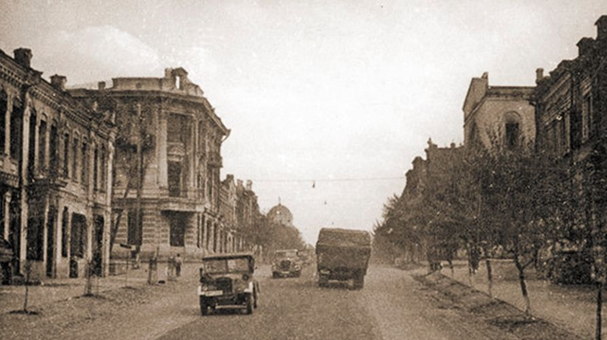 Sovetskaya str.The building (first from the left) in the place of apartment house №19. Photo beg.1940-ss. 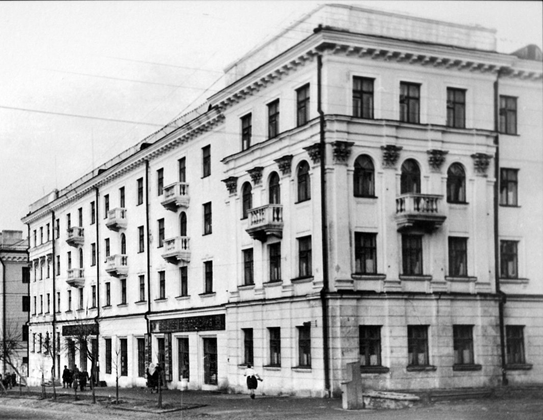 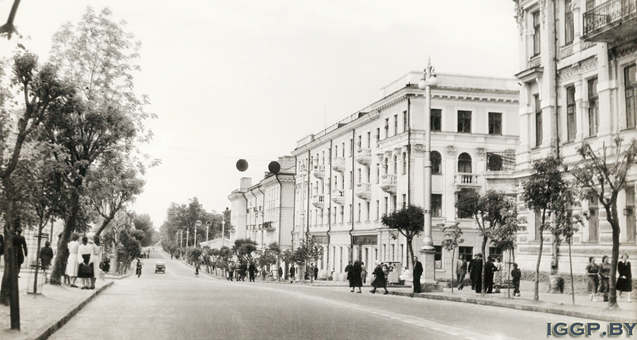 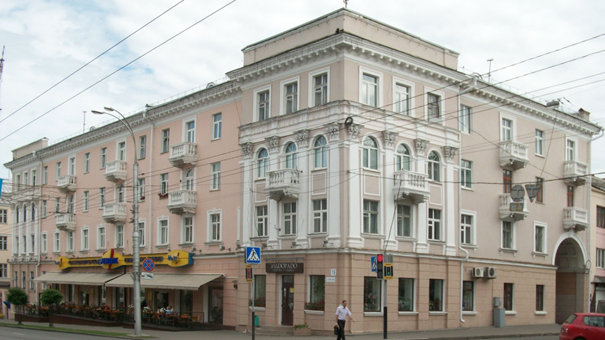 At the corner of Sovetskaya and Krestyanskaya streets.Building № 19.Photo 2012.
Gomel region
Belarus