Brick house No. 20 in Sovetskaya street is an L-shaped, three-storeyed building with a gable iron roof.

The composition of the main facade is symmetrical-axial three-part. The central part of the facade is distinguished by arches: semicircular windows and doorways, elliptical along the central axis of the facade – the courtyard passage of the ground floor, with double windows on the first floor, a three-part doorway of the second-floor balcony and the pediment of the building. The pediment is decorated with a round medallion with the coat of arms of the Republic of Belarus on the tympanum. The entrance groups of the first floor are complemented by pilasters (double, with rustication on both sides of the courtyard passage), stucco inserts with vine motifs (above the courtyard passage). A cornice made of dentucula on the ground floor divides the first and second horizontal tiers.

The plastic of the side parts on the ground floor is created by the alternation of window-showcases (they are wider in the left part) with pilasters with rectangular and square caissons. The main load on the decor is borne by the windows of the 2nd tier, grouped in pairs on the left side of the facade, and on the right – in threes. Against the background of flat platbands and window sills, other elements “sound". On the first floor there are arched sandricks with rosettes on the tympanums and cornices from a row of ears with caissons on the sides. Groups of windows are united by panels- "aprons". On the second floor there is a "belt” in the upper part of the platbands, on which the windows are" strung”, and stepped window sills with panels. The frieze of the building plays the role of sandricks with floral ornaments. Modulons with acanthus leaves are common elements for windows and friezes.

Site development of Rumyantsevskaya Street by multi-storeyed brick "profitable" houses began at the end of the XIX century. The ground floors were rented out for shops and offices, the rest were rented to tenants. The house of doctor D. E. Zakharyin also belonged to this category (houses of that time were rarely numbered and were usually known by their owner). The building was the result of a complex reconstruction (1906) of 1-and 2-storeyed buildings designed by S. D. Shabunevsky. On the ground floor, the premises for the store were expanded, the second floor was built on, a whole fragment was completed in the right part of the house. As a result, a continuous front of capital multi-storeyed development of Rumyantsevskaya Street was formed.

The ground floor was occupied by a grocery store of B.A.Lieberman, a shoe store of R.Tsypkin, a bookbinding institution of Ber, a barber shop "Progress“, a tailor shop of Sh.T.Einstein,” Petrogradskaya confectionery", a cafe and a bakery of Khaykin. The fate of the building in the pre-war period is not known. During the Great Patriotic War it was destroyed, restored only in the first half of the 1950s (different dates are given in the documents). It is known that in 1985, a store was located on the ground floor, a public institution was located on the first floor while the second floor was used for housing. In the 2000s (possibly earlier) the building housed the regional court. The 1st and the 2nd floors are used as residential. 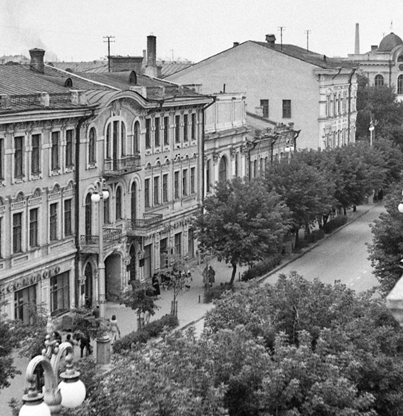 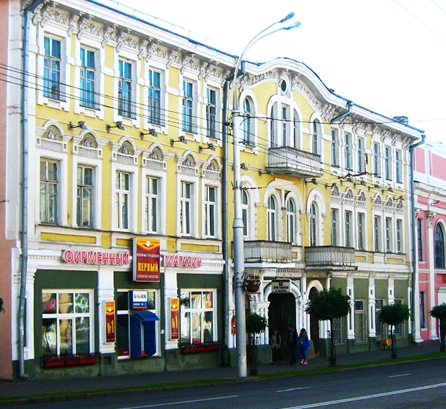