The building has a complex configuration and is a four-story volume with an attic fourth floor at the corner, which gives the facades an asymmetric shape. On the side of Sovetskaya Street it is braced with blades, highlighting the line of window openings on the staircase (the element is found at all entrances), which is visually continued by an attic with a square-shaped window under a keystone. From the side of the attic there is a parapet in the form of a concrete balustrade with pedestals. On street facades the measuring rows of square windows are vertically separated by balconies, alternating with loggia. The balconies have concrete paneled railing. The inter-window space of the upper floors is decorated with frieze elements of low relief with Belarusian ornament. The ground floor is highlighted by the display windows of trading institutions.

In the 1920s-1930s. the style of constructivism was expanded in architecture. During that period several buildings with obvious features of this style were built in Gomel. Among them there was a house at Sovetskaya St, 30 (formerly Sovetskaya St, 56). It was used as a residential building, on the lower floors of which there were social and cultural institutions. It was damaged during the Second World War and restored in 1949. Now, in addition to residential apartments, the building houses the Arcada de Luxe store, the Shokoladnitsa cafe, and others. 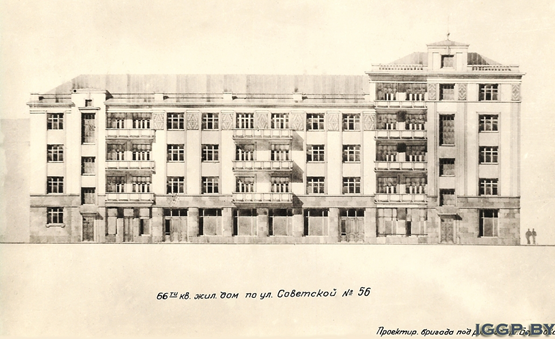