The Philharmonic Hall is located in the historical center of Gomel, at the corner of Sovetskaya and Zharkovsky streets. The building is brick and has a two-story L-shaped structure in the plan.

The main facade of the asymmetric building is vertically divided into three parts-the central one, which protrudes beyond the facade line, and the side ones. The ground floor is separated from the first one by a wide profiled draft. The central part of the facade has two semi-columns, which pass into the balcony of the first floor. The corner parts of the building are decorated with horizontal Rustic masonry. The dynamics of the facade is given by two rows of identical window openings, finished with a window plinth in the form of architectural rods. The roof is gable and has one hip dormer window.

Sovetskaya Street is one of the three central streets of Gomel, around which the city grew and developed. By the beginning of the second decade of the twentieth century, Sovetskaya Street in its best part (from modern Lenin Square to Victory Street) was built up with two-and three-story stone buildings with towers-elements of beautiful architecture. On this site, it was paved and had a tiled sidewalk.

Sovetskaya Street is intersected by more than a dozen cross streets. Among them is Zharkovsky Street (formerly Drugstore Street). It was built up with the estates of engineers, doctors, teachers and other popular specialists. Before the revolution, the building in which the Philharmonic Hall is located today was used as an apartment building. On the ground floor there was a wallpaper workshop of G. Minkovsky., a bicycle shop and accessories for it by B. Marinbach, " a first-class workshop of men's dresses by L.B.Elkin”, several credit institutions, possibly a pharmacy. On the first floor there were living rooms. In the early twentieth century. the Vygotsky family (where the famous psychologist Lev Semenovich Vygotsky came from), lived in the building,

During the Great Patriotic War, the building was severely damaged. Due to its presence on the main street of Gomel, it was restored in 1947. After the war it housed an agricultural technical school, then the Central District Executive Committee. In 1982 by the decision of the executive Committee of the Gomel City Council of People's Deputies (December 31, No. 770) it was transferred to the regional Philharmonic Society, which still owns it today. 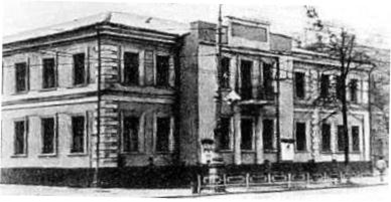 32, Sovetskaya Street.The photo of the first half of the twentieth century.