The building is three-storeyed, rectangular in symmetrical-axial composition. The middle part of the main facade in Sovetskaya street is distinguished by an 8-column two-floor portico without capitals, covered with a panelled parapet-balcony. The sides of the main facade have projections with rusticated walls on the ground floor. The first floor windows are located in niches with semicircular ends and key stones. The courtyard façade has preserved the ionic portico of 8 semi-columns. Due to the re-equipment of the building for industrial needs, the historical interiors were lost.

At the beginning of the XIX century a new architectural and planning structure was formed in Gomel, public facilities were actively built, primarily on Proboynaya street (now - Sovetskaya street). The owner of the Gomel estate, Count N.P. Rumyantsev initiated the construction of an elementary school, in which teaching was carried out according to the method of mutual learning of the English teacher J. Lancaster. The school complex (the main building, 4 outbuildings, a bathhouse, a barn and a stable) occupied an entire block on the outskirts of the city. The two-storeyed main building in the classicism style (architect Ivan Dyachkov, with the participation of John Clark) had a symmetrical main facade, an ionic 8-column portico under a triangular pediment. Side facades were also decorated with porticoes. Lancaster School was opened in 1819 and was the first institution of this type on the territory of the Russian Empire.

After the death of N.P. Rumyantsev in 1826, the school was closed. First, a weaving factory was located in its main building, and in the 1840s - a hospital and barracks (the so-called "White Barracks"). Perhaps at the same time the main volume of the building received the third floor, a parapet and a rectangular attic on the central facade, but lost the capitals of the columns and the pediment.

During the First World War a distribution point was deployed on the territory of the former school. In 1916 an uprising of soldiers took place there (with about 4,000 participants). In 1967 a memorial plaque was erected on the building in memory of the rebels. In the interwar period it housed the cavalry division. During the Second World War the Nazis created the central transit concentration camp Dulag 121 in this place, where more than 100,000 people died. The building of the former school was used by the Nazis as an administrative building. In 1970, a memorial plaque was erected on it in memory of the victims of the Nazi terror.

In 1946, the destroyed building was handed over to the shoe factory “Trud”, and was restored by 1953. Since 1958, new buildings have been added, where both administrative and production premises were located (the last one was built in 1984). They have the same address, but they are not architectural monuments. Now the building of the former Lancaster school is the administrative building of OJSC “Trud”. On the ground floor there is also a company store and other institutions.

Proboynaya street  (now - Sovetskaya street). Facade of the Lancaster School building. 1844, based on materials from the Russian State Military Historical Archive. From the book by V.F. Morozov "Classic Gomel", 1997

Sovetskaya street. The building of the shoe factory “Trud”. Photo of the 1940s. From the funds of the Museum "Gomel Palace and Park Ensemble". 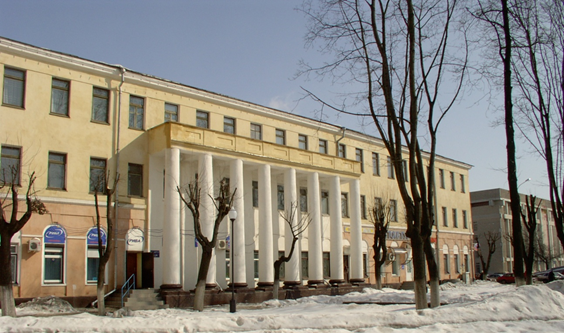