Building number 4 in Sovetskaya street in Gomel is a 3-storey building with a complex plan configuration. The flanks extended towards the courtyard form an interior small yard, from which there is an entrance zone to the entrances.

The main facade is especially gorgeous. It has a symmetrical composition, the center of which is distinguished by a shallow projection topped with a baroque attic with volutes over the cornice. The risalit on the ground floor is accentuated by an entrance opening under a gently sloping arched vault. On both sides of it there are shop windows, the piers between which there is a horizontal rustic with figured niches-panels.

The rhythm of the second floor is created by rectangular window and balcony openings (arched in the risalit) in rectangular platbands under the keystone. The balcony of the risalit has a trefoil-like appearance, with semicircular balconies on either side of it. Under the windows, on recessed rectangular panels, there are stucco bas-reliefs with pairs of dragons tied with tails.

On the third floor, a row of rectangular windows is complemented by two balconies with forged lattices, ornamented with trellises and with volute-like curls with rosettes. Under the cornice there is a brick frieze in the form of an arcature belt with oblique crosses, resting on the lesenes.

The facade and the risalit are flanked with lesenes with rustic. The external decor also uses profiled rods, a complex panel, dividing the windows of the 2nd and 3rd floors in the risalit, metal gratings (roof). The courtyard facades are modestly decorated: denticles under the roof, curb, profiled rods. The interiors are of no particular value.

The connection of the elements of the so-called "Russian style" in the exterior of the building, Baroque and Art Nouveau motifs allows us to include the house number 4 in Sovetskaya street to the architecture of eclecticism and date to the turn of the XIX-XX centuries. It was built as a tenement house for Gomel merchant Yakov Lovyanov. Apartments were located on the 2nd and 3rd floors, on the 1st - Olshanskiy's office of the fur trade and Elkin brothers' oil plant, the commercial and industrial society of mutual credit, piano and violin classes of B.S.Razenblum's school. There were Minevich's workshops and he was a specialist in chronometers and complex watch mechanisms, Rakhlin's studio and one of the most famous Gomel photo studio of Levite.

During the Great Patriotic War the building was significantly damaged, in 1951 it was restored. Measurement drawings and photographs taken by German prisoners of war after the liberation of Gomel indicate that, despite serious internal damage, the appearance of the house has changed only slightly compared to its pre-war appearance.

Now the building houses residential apartments, on the first floor there is a shop. 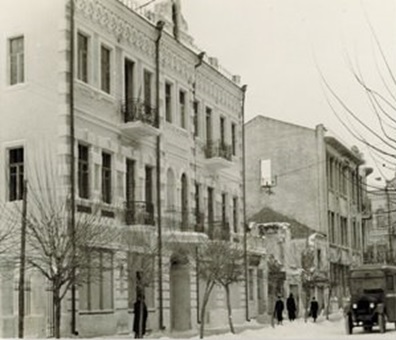 Sovetskaya street, the building in the foreground is merchant Lovyanov's former tenement house. Photo of the 1930s. 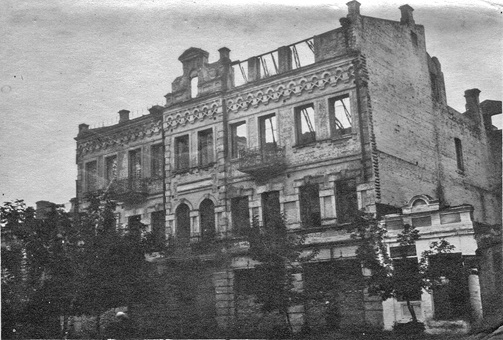 Sovetskaya street, house number 4. The photo of the 1940s. From the funds of the museum GIKU "Gomel palace and park ensemble". 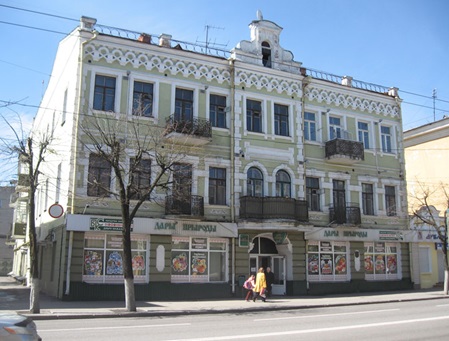