A two-story building at the crossing of Sovetskaya and Lange streets was built 1910-12. designed by architect Oscar Rudolfovich Munts in the Art Nouveau style. The building has become one of the street dominants.

The architect presented the corner part as a visiting card of the bank - in plan he performed it in the shape of a semicircle and completed with a high blind drum with a dome. In the center of the drum there are sculptures of Hermes, the god of entrepreneurship and trade, and an allegorical female figure. The windows of the first floor are flanked by half-columns of the Doric order, and the high relief above them is an ornament on the radial surface of the facade of three cartouches (heraldic compositions with signs of the god Hermes - caduceus and two wings from talarium), interconnected by festons.

The facade on the side of Lange street has arched windows with profiled arches alternating with rusticated spacers-pilasters in the form of fillets and mascarons above them on the ground floor. The facade on the side of Sovetskaya street retains the design of the spacers, but the modest rectangular windows themselves are supplemented only by brackets. This makes it possible to highlight the front entrance zone, emphasizing it with a lunette with two cards and garlands. The style of the walls of the second floor is set by rectangular windows with profiled platbands, narrow ornamental frieze and window-sill fillets.

All three parts of the building have additional entrances from the courtyard side. Iron gates from the side of the street lead to the courtyard. Lange (formerly arched, now rectangular): the lower part of their flaps is blind, the upper one is made of openwork lattice. Until 1963, a one-story construction adjoined the gate, on the site of which an extension was made to the main two-story building. Its decor is very tactful and does not violate the integrity of the ensemble.

After the nationalization of the building in 1917, the Gomel branch of the State Bank was located there. In 1941, the office was evacuated to Gorki, in 1942it was abolished. The branch resumed its activities after the liberation of Gomel in 1943. In 1987, it was reorganized into the Gomel Regional Directorate of the Belarusian Republican Directorate of the USSR State Bank. Since September 19, 1991 it is the Gomel branch of the National Bank of the Republic of Belarus.

In the 1990s the building was overhauled. The work on the restoration of the decor was entrusted to the Gomel sculptors G. T. Gorbanev and D. A. Popov. After a thorough study of fragments, analogues and archival data, they made copies of the compositions by the method of chiseling parts. After approval, new compositions were poured out and mounted on the facades. 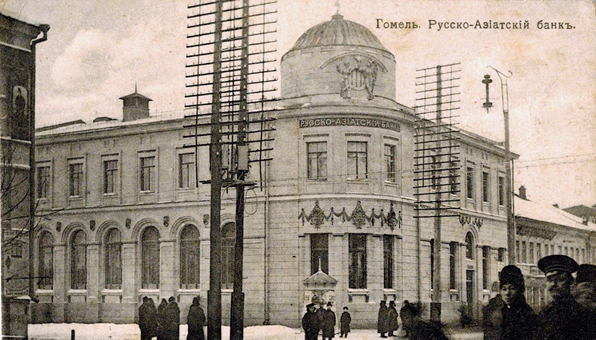 Rumyantsevskaya st. (now Sovetskaya). The building of the branch of the Russian-Asian Bank. Postcard of the beginning of the twentieth century. 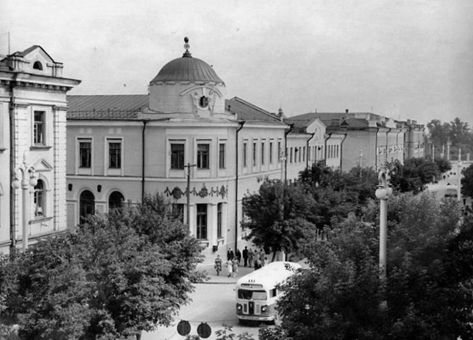 Sovietskaya st.. Building of the former branch of the Russian-Asian Bank (second left) Photo of the 1960s 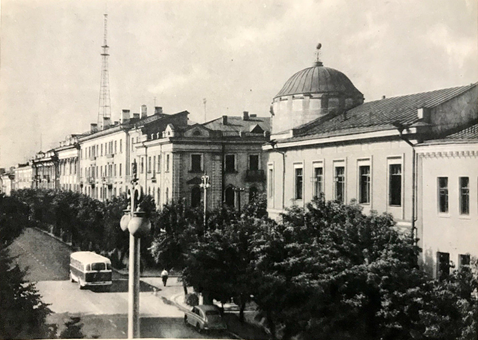 Sovietskaya st.. The building of the Gomel regional office of the State Bank of the USSR (second on the right). Photo from the album "Gomel in Photo Illustrations," 1961 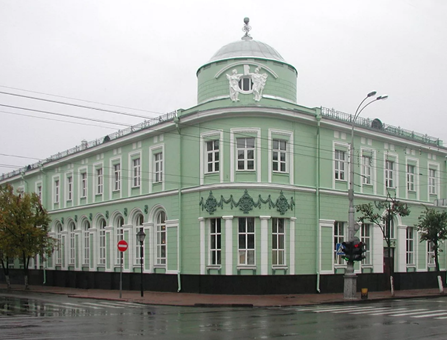 On the corner of Sovetskaya and Lange streets. The building of the Gomel branch of the National Bank of the Republic of Belarus. Photo 2014
Gomel region
Belarus