The three-floor rectangular building is in the Stalinist Empire style. The main facade has a symmetrical composition. The1st and 2nd floors are decorated with rectangular display windows, the 3rd with semicircular ones. The piers on the 1st floor are highlighted with large horizontal rustic, profiled panels with cartouches at the top. The wall on the 2nd and 3rd floors is decorated with pilasters with Corinthian capitals. The axis of symmetry is emphasized by the main entrance, a window and a panel above it (the 2nd floor) and a deaf lunette with a keystone and a cartouche (the 3rd floor). It is crowned with an arched pediment with a round lucarne on the tympanum. The border of the 1st floor is highlighted by an interfloor cornice, the border of the facade - by a profiled cornice with modulons, rosettes and a belt of dentils. A balustrade parapet runs along the edge of the roof.

The courtyard facade has traces of alterations in window openings and floor superstructures. In the center of the facade there is a 5-sided risalit with a staircase. Its arched windows are decorated with a keystone. The facade is completed by a profiled cornice. The tambour and the elevator shaft appeared in 1970. In the interior of the 1st and 2nd floors (possibly the 3rd), stucco rosettes with floral ornaments and Soviet symbols have been preserved on the ceilings.

The development of Sovetskaya Street (until 1919 - Rumyantsevskaya street) took shape in the second half of the 19th and early 20th centuries, when it acquired the functions of an urban center. After the Great Patriotic War, some of the buildings in it were restored with the preservation of artistic and stylistic features, and some of them were largely rebuilt. Building No. 15 belongs to the latter. The year of its construction is unknown, but in 1913 it already existed. The project was developed by outstanding architect Stanislav Danilovich Shabunevsky (1866-1937). The two-floor building before the Second World War was an example of the Art Nouveau style. The main symmetrical facade was flanked by wide decorated lesenes. The lesenes in the piers ended with large support brackets. The center of the facade was emphasized by an arched doorway and a balcony with an openwork lattice above it, a curved pediment. In the center of the courtyard facade there was a risalit for the staircase, on the roof there was a parapet (an openwork metal lattice between stone pedestals).

From the address directory of Gomel for 1913, it follows that the building housed the treasury and shops. The building was partially destroyed during the Second World War. In 1950 it was reconstructed with a third floor superstructure. The main facade received a new, corresponding to the time, architectural solution. The building was adapted for a trading house. Until recently, it served as a store. 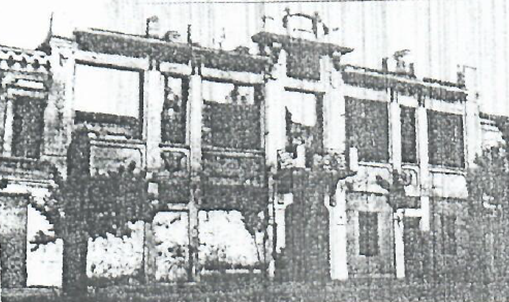 Sovetskaya street, house number 15. Photo of the 1940s. From the funds of the museum GIKU "Gomel palace and park ensemble". 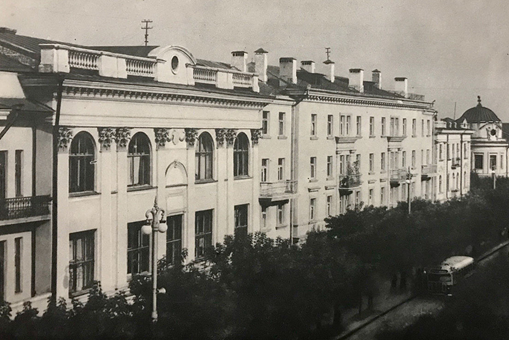 Sovetskaya street, house number 15 (second on the left). Photo from the album “Gomel in photo illustrations”, 1961 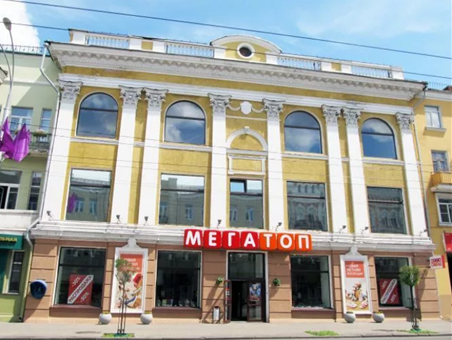