The building is two-storeyed, ribbon-shaped in plan. It faces Sovetskaya Street with a narrow facade, which is symmetrically divided into three parts by four pilasters with Corinthian order capitals. Above the main volume, ending with a strip of profiled moulding and a complex cornice with dentils, another volume is built, divided vertically by four rectangular panels. Above the main entrance, which is covered with sandrik – there is a large arched window in a profiled frame on the first floor. Two outbuildings are adjacent to the main volume from the courtyard side. The roof is metal, one - and two-pitched.

At the end of the nineteenth – the beginning of the twentieth century, due to the rapid development of Gomel’s industry and economy, which in turn caused active construction, the main commercial, entrepreneurial and social life of the city was concentrated in Rumyantsevskaya Street. According to the information of old residents of Gomel and archival data, in prerevolutionary times there was a confectionery store, a cafe (restaurant) and a hotel belonging to I. V. Yaskulsky in this part of the street. Most likely, the described building was a cafe (restaurant). In the funds of the State Historical-Cultural Establishment, “The Museum “Gomel Palace and Park Ensemble" photos of some houses along Sovetskaya Street have been preserved. They date back to the 40s of the last century. One of them shows an image of a building that was located on the site of a modern house under number 22. It was an Art Nouveau building with an asymmetric composition. The presence of the date in the decorative cartouche on the facade of the building -1903 - allows you to accurately date it. With a high degree of probability, this project can be attributed to the authorship of S. D. Shabunevsky – the city architect of that time.

During the Great Patriotic War the building was significantly damaged. During the restoration in 1953, the monument lost the features of Art Nouveau, acquired a symmetrical composition and stylistic features of the so-called “Stalinist Empire”, which is characterized by the use of classical motifs. Since its restoration the building has been used as a restaurant. In 1978, it was significantly increased in the direction of the courtyard, where 2 extensions were erected. In the main volume there were shopping and banquet halls, a buffet, in the volumes from the courtyard – a kitchen, cold and confectionery shops, a sink, etc., in the basement – warehouses. For some time, the basement was adapted for a bombshelter. The restaurant "Zarya" belonged to the trust of canteens and restaurants, since 1997-to the production and commercial enterprise “Centre " (since 1999-OJSC of trade “Centre”). In the early 2010s, the issue of reconstruction of the building with further use as a restaurant was considered. 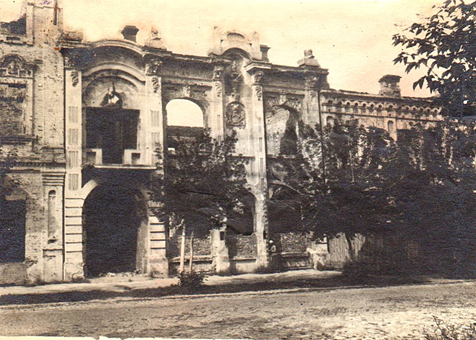 22, Sovetskaya Street. Photos of the 1940s. From the museum's funds of the State Historical-Cultural Establishment “Gomel Palace and Park Ensemble”. 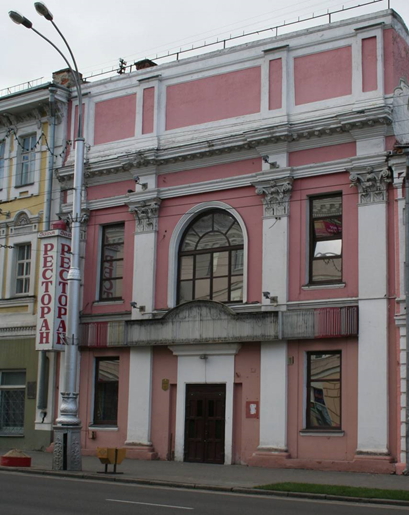